Items related to Halloween and Other Festivals of Death and Life

Home Santino, Jack Halloween and Other Festivals of Death and Life
Stock Image 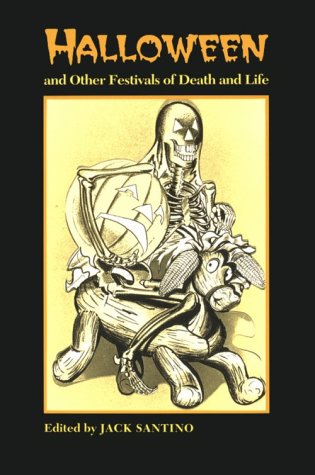 Halloween and Other Festivals of Death and Life

Quantity: 1
View all  copies of this book
Buy Used
Price: US$ 17.50 Convert Currency
Shipping: US$ 6.00 Within U.S.A. Destination, rates & speeds
Add to basket

xxviii, 280 pp, black-yel-orange-wht SC wraps w/color illustrated front panel. Collection of thirteen essays that examine the customs, communitites, and material culture to reveal how Halloween has exerted itself from a survivor of a dying tradition to a thriving, contemporary festival. Seller Inventory # 036833

Title: Halloween and Other Festivals of Death and ...

Essays discuss Halloween and related holidays and their adaptation to the modern world, including customs in Ulster, Pennsylvania, Newfoundland, Texas, the Canadian prairie, Vermont, Greenwich Village, and other places

"Halloween is many things to many people; we do not celebrate the day in any one way." So Jack Santino writes in this first ever collection of essays dedicated to the study of Halloween and related festivals. Thirteen folklore and culture scholars examine the evolution of Halloween from its Celtic origins through its adaptation into modern culture. Essays on holiday customs describe harvest and autumnal rituals in Scotland, new Halloween traditions in response to legends about contaminated candy, the custom of "pranking" (more popular in some areas of the U.S. than trick-or-treating), England's Guy Fawkes Day and a parallel Bonfire Night in Newfoundland, and the development of American trick-or-treating in the years 1940-1990.

Also covered are the sociopolitical meanings of carnival celebrations and attempts to control them, the Tex-Mex tradition of el Dío de los Muertos (Day of the Dead), and community approaches to Halloween in such diverse locales as the Canadian prairie, rural Vermont, and Greenwich Village in New York City. A final section looks at the history of Halloween noisemakers and unusual imagery (including the decoration of graves) in two Southern settings. In several of the essays, the authors examine the ironic, even disturbing, implications of such a popular holiday being based on images of death, evil, and the grotesque.

Halloween and Other Festivals of Death and Life is written with a lively balance of scholarship, anecdotes, and enthusiasm, with ample black-and-white illustrations. Whether you're interested in Halloween as a scholar or simply a celebrant, this is the book you need. --Fiona Webster

We specialize in children's illustrated books, cookbooks, Texana and Americana. We carry americana & Texana ephemera along with cooking ephemera. See our Web page at http://www.curiocornerbooks.com


All subject to prior sale, returns accepted within 7 days if not
as described, with prior approval. PAYMENT: Check/credit card:DISCOVER/NOVUS/AMEX/VISA/MASTERCARD. Shipping USPS 4th class bookrate: 1st book $4.50,
each additional book $1.50. Priority Mail $8.50. These rates are for continental USA. (inquire for airmail, Fedex, or other carriers) International shipments inquire for rate. TEXAS residents charged 8.25% sales tax.


Our books are wrapped in kraft paper, and then placed in a folding cardboard for protection. Light ephemera is the exception, it will be packaged in padded envelope. Shipping costs are based on books weighing 2.2 LB, or 1 KG. If your book order is heavy or oversized, we may contact you to let you know extra shipping is required. INTERNATIONAL ORDERS WILL REQUIRE MORE POSTAGE THAN ABE IS ALLOWING TO BE LISTED.