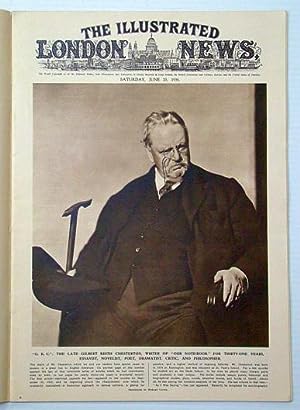 Published by The Illustrated London News, London, 1936
Condition: Good Soft cover
Save for Later
From RareNonFiction, IOBA (Ladysmith, BC, Canada)

Pages 1097- 1142. Features: Cover photo portrait of "G.K.C.", The late Gilbert Keith Chesterton, writer of "Our Note-Book" for 31 years, essayist, novelist, poet, dramatist, critic, and philosopher; Photos of Bucharest catastrophe where grandstand for 6000 collapsed, killing 100 and injuring 600; One page photo of the first Westchester cup polo match where America beat Great Britain at Hurlingham by 10 goals to 9; Photo illustrated book review of "Cradle of the Storms", by Bernard R. Hubbard; Amazing page of seven photos of the Naga headhunters of Burma; Two more pages of photos illustrate the life of the Naga headhunters - skull trophies, spirit worship, community drumming, and housebuilding; Page of illustrations show how flying fish take off and glide; Interesting photo taken from the top of the Big Ben Tower; Photo illustrated article discusses fresh discoveries at Megiddo, the ancient stronghold controlling a pass used by Egyptian invaders of Palestine in 1479 BC, and in the great war by Lord Allenby of Megiddo; Three pages of photos of objects and sites unearthed at Megiddo reveal Babylonian religious influence in Palestine about 1500 BC; One page of colour illustrations of exquisite Javanese Topeng masks; Photo of Royal Ascot without Royal attendance due to court mourning for King George; Photos of labour upset in France and Belgium; Photo of the Women's League of Health and Beauty at Olympia; Photo of opening of the new airport at Shoreham; One-page illustration of J. H. Thomas announcing his resignation from the House of Commons after 27 years of service; Arab Riots in Palestine and the measures taken for their suppression - disorder in Jaffa and elsewhere - twelve photo centrefold; Photos of personalities of the week include the United States Wightman cup team, the British Wightman cup team, L. H. Myers, Alfred M. Landon, Henrietta Barnett, Dr. M. R. James, M. Van Zeeland, Lady Snowden with Gypsy Smith, and the ruler of Bahrain (Bahrein) in England - Sheikh Isa Al Khalifah with his sons at Folkstone; Photos of lighting being used to track the body movements of pool divers; One page photo portrait of peace Memorial in white onyx - the 36 foot masterpiece by Carl Milles unveiled in the City Hall at St. Paul, Minnesota; Nice one page photo illustrated ad for Whitbread's pale ale; Nostalgic one page illustrated ad for Kensitas cigarettes features Nancy O'Neil; Classy halfpage illustrated ad for Rover cars; Nice back cover two-colour ad for the Sporting and Dramatic News promotes their golf coverage. Unmarked with moderate wear. Please note: pages 1023- 1024 missing. Several internal pages loose but present. A worthy vintage copy. Bookseller Inventory # 338H0997

Full-time specialists in rare non-fiction books and vintage magazines since 2001. Our detailed descriptions and photos communicate a high level of information about our offerings, thus enabling you to make a more comfortable purchase decision. Should you have any questions or require additional photos of an item you wish to purchase we will be pleased to assist. Please contact us for details. We will promptly process your order and provide your tracking number. Your purchase will be fully insured while in transit to you. To this end, we pack very securely in sturdy new cartons, often double-boxing to insure the safety of your shipment. We accept payment by PayPal where our account is info@rarenonfiction.com. We also accept payment by check drawn upon banks in the USA or Canada and will ship when your check clears. To pay with BTC, ETH, or LTC please email us first. As proud members of IOBA, the Independent Online Booksellers Association, we abide by its code of ethics and offer toll-free support at 1-877-660-6118 or +1-250-245-8959. Please contact us with any questions prior to, during, or after your purchase. We appreciate your interest and look forward to working with you.


Call 1-877-660-6118 or +1-250-245-8959 to order today. We ship in sturdy new cartons with full insurance and tracking. Photos available upon request. Questions? Please ask. Misdescribed items fully refunded. Contact: Owners, RareNonFiction.com, 13387 Code Road, Ladysmith BC V9G 1H7, Canada. Note to Canadians: No GST or HST will be added to your order.


We pack securely in sturdy new cartons and include tracking and full insurance with each shipment. US-bound orders shipped promptly from Washington state via USPS.