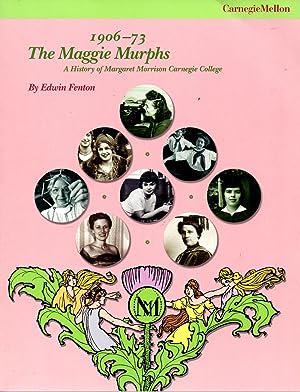 This volume has been written primarily for alumnae of Margaret Morrison Carnegie College. It covers the history of the school beginning with the charter class that entered in 1906 and ending with tis final class that graduated in 1973. Rich with illustrations, this intriguing volume combines photos and illustrations with the reminiscences of more than 140 alumnae and two-page interviews with 18 representative graduates and one dean.

EDWIN (TED) FENTON (HA '66), Professor Emeritus of History, joined the Carnegie Institute of Technology (Carnegie Tech) faculty in 1954, and taught Margaret Morrison women for many years. He has served under five of Carnegie Mellon's eight presidents and has received the University's highest honor in teaching (the William H. and Frances S. Ryan Teaching Award) and education (the Robert Doherty Prize for Educational Leadership). Author or editor of more than 200 publications, Fenton has also served as director of the Carnegie Education Center, the University Teaching Center, the Center for University Outreach and the Educational Facilities Committee. He was a founding member of the Academy for Lifelong Learning and a lifetime member of the University's philanthropic association, the Andrew Carnegie Society. Fenton spends his summers in Wellfleet on Cape Cod, where he fishes, gardens, makes furniture, reads, writes and celebrates life with his wife, Barbara, and assorted offspring, friends and dogs.


Payment accepted via credit card, check/money order, or PayPal. Credit cards accepted via ABEbooks or PayPal ONLY--please do not send us your credit card information, as we have no way of processing it ourselves. If paying via PayPal, please remember to include shipping and handling. Our PayPal account is bookbooth@usa.com.

International orders must be pay...


Payment accepted via credit card, check/money order, or PayPal. Credit cards accepted via ABEbooks or PayPal ONLY -- please do not send us your credit card information, as we have no way of processing it ourselves. Our PayPal account is bookbooth@usa.com. If paying via PayPal, please remember to include shipping & handling charges. Checks and money orders are also accepted; please make them payable to: C.M. Casciani, 441 W. Bagley Rd. #173, Berea OH 44017. Library and institutional orders welcome; please email us if you require any special handling. International orders must be payable in US dollars. SHIPPING & HANDLING: all books shipped in USA via USPS; Media Mail 7-14 business days for delivery, $4.00 for first book - $1.50 each additional book; or, Priority Mail 2-4 business days for delivery, $6.00 first book - $2.50 each additional book. Returns for reasonable grading of condition; email us prior to return for shipping instructions.