Items related to Medal of Honor: Profiles of America's Military... 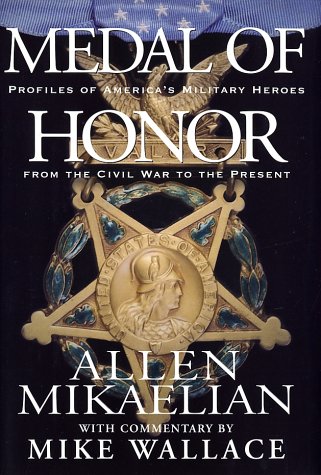 Medal of Honor: Profiles of America's Military Heroes from the Civil War to the Present

The Congressional Medal of Honor is Americas highest military award. In this remarkable work, the first of its kind, acclaimed 60 Minutes reporter Mike Wallace looks at the lives of the recipients of the medal and explores what it is that drove them to go so far above and beyond the call of duty. Wallace examines not only their extraordinary feats in battle (plunging into heavy fire, throwing themselves on live grenades, attacking enemy regiments single-handed), but also their lives before and after. Throughout the book, and particularly in his moving introduction, he meditates on the meaning of courage and shows what we can learn from the lives of those who perform amazing acts of selflessness and bravery.

Allen Mikaelian received his M.A. in history, with distinction, from the University of London's Institute for English Studies. He lives in Washington, DC, and serves as a board member and adult literacy tutor with the Washington Literacy Council.

Mike Wallace is a leading force behind CBS's "60 Minutes," which has ranked among Nielsen's top ten highest-rated primetime programs for twenty-three consecutive seasons -- a record no other program has approached. He has won nineteen Emmy awards and countless other professional honors. He lives in New York City.