Items related to The Sea Shall Embrace Them: The Tragic Story of the...

Home Shaw, David W. The Sea Shall Embrace Them: The Tragic Story of the Steamship ...
Stock Image 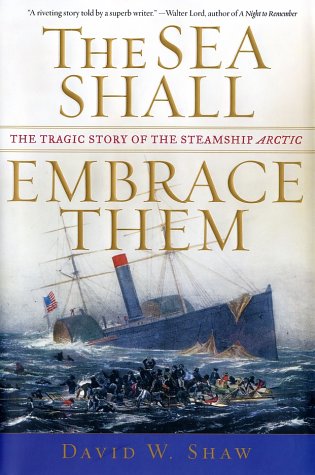 The Sea Shall Embrace Them: The Tragic Story of the Steamship Arctic

Title: The Sea Shall Embrace Them: The Tragic Story...

The 1854 collision at sea between the Arctic and the Vesta, a much smaller French steamship, set in motion one of the most harrowing events in maritime history, with enormous and tragic consequences. David W. Shaw, who brings decades of experience as a seaman to his writing, has based this riveting tale on the firsthand testimony of the few who survived the wreck, including its heroic captain, James C. Luce. It is the story of the brave and dutiful Luce fighting his mutinous crew as they take the lifeboats, leaving hundreds of men, women, and children to suffer a cruel and painful death. It is also the story of those who survived the frigid waters and those who perished -- including Luce's own frail son, who died as the grief-stricken captain helplessly watched. Not only did 400 people die by daybreak, the wreck brought to an end the domination of the seas by the American maritime fleet. Utterly compelling, beautifully written, and a fascinating, heretofore little-known slice of American history, The Sea Shall Embrace Them is a stirring narrative that puts the reader on the deck as a shipful of men, women, and children do battle both with a mighty ocean and with their own baser instincts to survive.

By the mid-19th century, steamships were eclipsing traditional sailing ships in the lucrative transatlantic trade. The largest of these, the American Arctic, collided with a smaller vessel in 1854 with a frightful, and unnecessary, loss of life. David W. Shaw's The Sea Shall Embrace Them tells the story of this disaster, eerily similar in many ways to the later sinking of the Titanic. Shaw lays out the immediate and secondary causes of the disaster: bad weather, no established shipping lanes, the ship's owners' preference for speed rather than prudence, and an appalling lack of safety precautions. As well, he describes the suffering and grotesque deaths of many aboard and dozens of acts of pure cowardice on the part of the crew. The writing for the most part is vivid and effective, though the physical layout of the ship is somewhat murky. The story of the Arctic is not only sad and the tragedy avoidable, but one that, as Shaw points out, would be repeated many times in the decades to follow. --H. O'Billovitch

Bearly Read Books is the largest Rare and Used Bookstore in the Metrowest area of Massachusetts. We stock 36,000 titles in a spacious store. We are open six days a week, Wednesday, Friday and Saturday 10 to 6, Thursday 10 to 8 Tuesday and Sunday 12 to 5, and have ample parking both in the front and back of the store. We specialize in military, children's, local history, cooking and the classics, but have many other categories in the store.


Returns Policy: Returns accepted if not as described within 10 days.


Orders ship within two business days but usually within one day, If we get the order before 10AM, we do ship same day. Shipping costs are based on books weighing 2LBS. If your book order is heavy or over-sized, we may contact you to let you know extra shipping is required.