Items related to A Search for Enemies 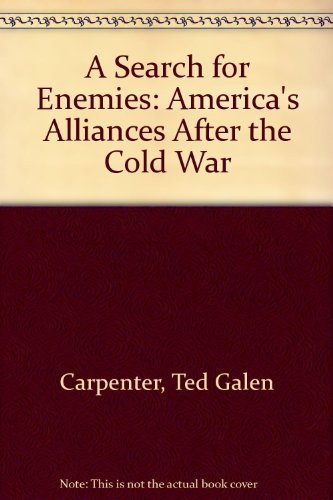 A Search for Enemies

Title: A Search for Enemies

The passing of the Cold War is the most important development of the late 20th century, yet the United States clings tenaciously to old policies. Both the Bush administration and Democratic leaders have insisted on perpetuating a host of obsolete alliances, including NATO and the alliance with Japan, which cost American taxpayers nearly $150 billion a year. Ted Galen Carpenter, director of foreign policy studies at the Cato Institute, offers a provocative critique of that status quo strategy.
Although Washington's outdated alliances have no real adversary or credible mission, Carpenter says, they hold the potential to embroil the United States in obscure conflicts, ethnic and otherwise, that have little relevance to America's legitimate security concerns. As an alternative, he proposes "strategic independence," under which the United States would act only to defend vital interests - the republic's physical integrity, political independence, or domestic liberty.
Carpenter calls for "the foreign policy equivalent of zero-based budgeting," insisting that because of the dramatic changes in the world caused by the collapse of the Soviet Union, "all alliances must be justified anew, regardless of any utility they may have had during the Cold War." He places under the microscope America's multilateral treaty obligations to defend other nations - NATO; ANZUS, which links the United States, Australia, and New Zealand; and the Rio Treaty, which provides a collective defense arrangement for the Western Hemisphere. He also examines four important bilateral security agreements - with Japan, South Korea, the Philippines, and Pakistan. This is the book on a new foreign policy for the United States.

Renaissance Books is an independent book store specializing in history, philosophy and science. We also carry a wide selection of science fiction and a growing selection of European literature in English, German and French. In our store we sell Music CD's (Jazz & Classical) and Videos.


Orders can be placed through abebooks.com and paid for by Credit Card or PayPal or a pro-forma invoice can be sentby email for payment by check or money order.