Items related to Treason was No Crime: Ludwig Beck, Chief of the German... 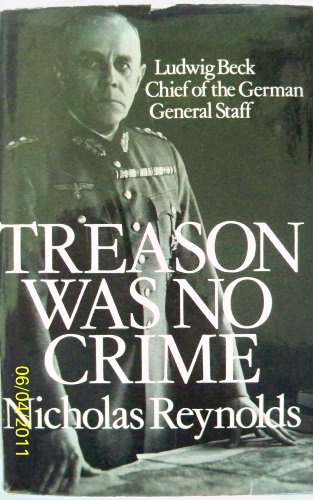 Treason was No Crime: Ludwig Beck, Chief of the German General Staff

Quantity: 1
View all  copies of this book
Buy Used
Price: US$ 100.00 Convert Currency
Shipping: US$ 5.00 Within U.S.A. Destination, rates & speeds
Add to basket

317, [3] p., [12] p. of plates: 2 ill., ports.; 24 cm. Abbreviations and Translations. Notes on Sources. Notes. Index. Introduction by Sir John Wheeler-Bennett. From Wikipedia: "Ludwig August Theodor Beck (29 June 1880 21 July 1944) was a German general and Chief of the German General Staff during the early years of the Nazi regime in Germany before World War II. Ludwig Beck was never a member of the Nazi Party. In serving as Chief of Staff of the German Army between 1935 and 1938, Beck became increasingly disillusioned, standing in opposition to the increasing authoritarianism of the Nazi regime and Hitler's aggressive foreign policy. It was due to public foreign policy disagreements that Beck resigned as Chief of Staff in August 1938. From this point, Beck came to believe that Hitler both Hitler and the Nazi party needed to be removed from government. He became a major leader within the conspiracy against Hitler, and would have been provisional head of state had the 20 July plot succeeded, but when the plot failed, Beck was arrested and was then shot dead." Good in good dust jacket. DJ has some wear, and soiling. Seller Inventory # 70717

Title: Treason was No Crime: Ludwig Beck, Chief of ...

Founded and operated by trained historians, Ground Zero Books, Ltd., serves the book collector, the scholar, and institutions. We focus on the individual, and pride ourselves on our personal service. Please contact us with your wants, as we have many books not yet listed in our database.


Orders usually ship within 2 business days. Shipping costs are based on books
weighing 2.2 LB, or 1 KG. If your book order is heavy or oversized, we may contact
you to let you know extra shipping is required.