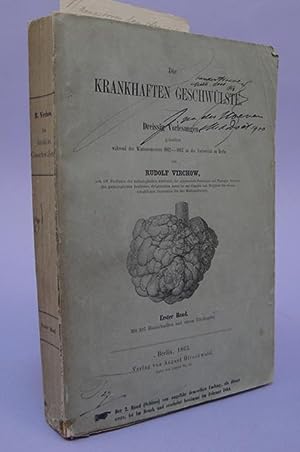 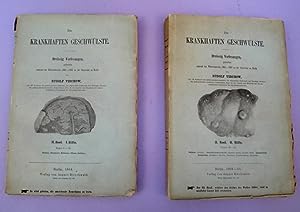 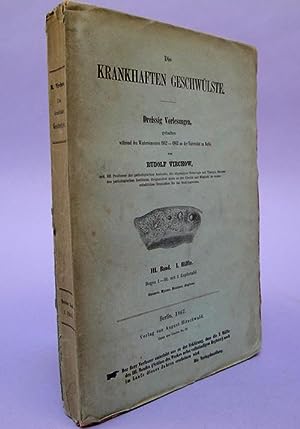 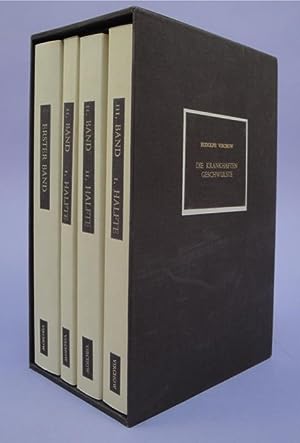 In the Extremely Rare Original Wrappers Virchow, Rudolf (1821-1902). Die krankhaften Geschwülste. 3 vols. in 4 [all published]. Erster Band: xii, 543, [1]pp. plus 33-page publisher's catalogue; 1 plate. II. Band, 1. Hälfte: [2], 288pp. II. Band, 2. Hälfte: x, 289-756pp. III. Band, 1. Hälfte: [2], 496pp.; 1 plate. Text illustrations. Berlin: August Hirschwald, 1863-67. 245 x 170 mm. (uncut and partially unopened). Original printed wrappers, minor wear and chipping, spine of last volume partly split; preserved in cloth slipcase with chemises. Minor dampstaining, uncut edges a little frayed, a few signatures loose, pp. 106-7 in Vol. I with some offsetting from laid-in sheet of manuscript notes (see below). Very good set. From the library of Dutch surgeons Jan van der Hoeven (1834-1900) and his son Jan (1863-1941), with their signatures, dated 1863 and 1900 respectively, on the front wrapper of Vol. I; van der Hoeven bookplate in last volume; densely written sheet of manuscript notes in the hand of the first van der Hoeven laid in. First Edition, in the extremely rare original wrappers, of Virchow's highly influential work on morbid tumors-his "most ambitious literary undertaking" (Ackerknecht, Rudolph Virchow). "Tumors were perhaps Virchow's greatest interest, and in 1863 he began publication of what was to be a comprehensive treatise on the subject. It was never completed, for Virchow stopped when he reached the point where carcinoma was to be discussed, probably because of the vigorous attack which Remak and others were making on his conception of the histogenesis of epithelioma. Nevertheless this work remains one of the great source-books on cancer" (Haagensen, An Exhibit of Important Books Illustrating the Evolution of the Knowledge of Cancer, p. 80). "[Virchow's] works in the field of oncology have been of the most far-reaching importance. Although he himself did not deal with cancer in his famous work 'The morbid tumors,' which was left incomplete, we can nevertheless find in it his general opinions of tumors. . . . [H]e designated as homologous tumors the type whose tissue elements are those which form in places that normally contain the same kind of tissue; the heterologous tumors are those which form in a place where the typical tissue elements of the tumors normally do not occur. Thus, 'deviation from the type of the mother tissue' represented to Virchow the characteristic feature of malignant neoplasm. Virchow presented this anatomical and histological characteristic as the principal criterion for the classification of tumors. . . . "On the basis of these views Virchow, for the first time, and in a systematic manner, separated sarcomatous tumors from carcinomas. Sarcomas deviate little, structurally, from the typical structure of the different kinds of connective tissue, and distinguish themselves only by their great 'number of cells' and not by the 'form.' With this theory Virchow sought to eliminate the classification into benign and malignant tumors, which, though rather unscientific, had been commonly used by practitioners until that time" (Wolff, The Science of Cancerous Disease from Earliest Times to the Present, p. 185). Virchow's Die krankhaften Geschwülste, based on a series of lectures, is normally found bound in three volumes; it is extremely rare in the original four parts with their printed wrappers. This copy was once owned by the Jan van der Hoevens, father and son, both of whom practiced as surgeons in Leiden. Garrison-Morton 2617. Lindeboom, Dutch Medical Biography (for the van der Hoevens). . Seller Inventory # 41151


Shipping charges will be applied to all orders. All items are guaranteed as described and all purchases may
be returned for any reason within two weeks of receipt. Please notify us in advance if you are making a
return.
Legal entity: Jeremy Norman & Co., Inc.
Business address: 936-B Seventh St., PMB 238, Novato, CA 94945-3000
Email address: orders@jnorman.com
Phone: 415-892-3181
Federal Tax ID Number:94-2261335
Authorized representative: Jeremy M. Norman


Orders usually ship within 2 business days. Shipping costs are based on books weighing 2.2 LB, or 1 KG. If your book order is heavy or oversized, we may contact you to let you know extra shipping cost is required.