Items related to The travels of William Bartram 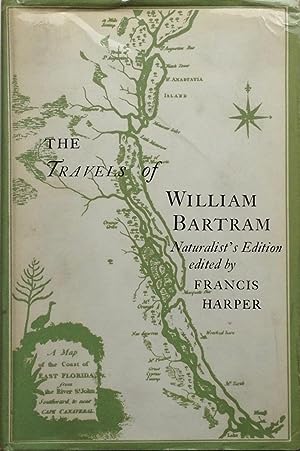 The travels of William Bartram

Title: The travels of William Bartram

"Slaughter has broken the confines of ordinary narrative history. . . . Books about the business of fatherhood and the trials of sonhood are very rare, and this is a fine one."
--Boston Globe

John Bartram was the greatest horticulturist and botanist of eighteenth-century America, a farmer-philosopher who won the patronage of King George III and Benjamin Franklin. His son William was a pioneering naturalist who documented his travels through the Florida wilderness in prose and drawings that inspired a generation of Romantic poets. In telling their stories, Thomas Slaughter creates a complex and compelling dual biography that is also a history of early American attitudes toward nature.

As he follows the Bartrams through their respective careers--and through the tenderness and disappointment of the father-son relationship--Slaughter examines the ways in which each viewed the natural world: as a resource to be exploited, as evidence of divine providence, as a temple in which all life was interconnected and sacred. The Natures of John and William Bartram is a major work of natural and human history--beautifully written, psychologically insightful, and full of provocative ideas concerning the place of nature in the imagination of Americans, past and present.

"A fascinating page-turner that should not be missed. "
--Michael Kammen, Cornell University

John Bartram (1699-1777), "the first native-born American to devote his entire life to the study of nature," was an eminently practical man, a scientist devoted to the rigorous description of living things. Among his subjects was the Venus flytrap, along with hundreds of species of plants and animals, fully "one quarter of all the plants identified and sent to Europe during the colonial period." His son William (1739-1823) was, by contrast, something of a dreamer, and far less methodical a scientist than was his father. Yet his lyrical Travels, an account of specimen-collecting in the Deep South, is read today, while John Bartram's work is not. Thomas Slaughter examines their lives, noting the influence both men had on Henry David Thoreau and the English Romantics, especially Samuel Taylor Coleridge and William Wordsworth.

Established in 2008, Acanthophyllum Books specialises in out-of-print and rare books in the natural sciences, especially botany. Its name is taken from a group of spiny plants inhabiting the highlands of south-west Asia. We are members of the Provincial Booksellers' Fairs Association, observe their professional standards, and exhibit regularly at PBFA book fairs.


All items are offered subject to prior sale.
Any items held to be unsatisfactory may be returned, providing such
returns are notified to us in advance.
Any contract arising from an order is made under British law.
Title to any goods does not transfer from the seller until payment is
received in full.
All items are priced in Pounds Sterling.
Unless instructed otherwise all dispatches will be insured for all risks.


Orders usually ship within 2 business days. Shipping costs are based on books weighing up to 0.9 KG. If your book order is heavy or oversized, we may contact you to let you know extra shipping is required. Payment is also accepted by PayPal.