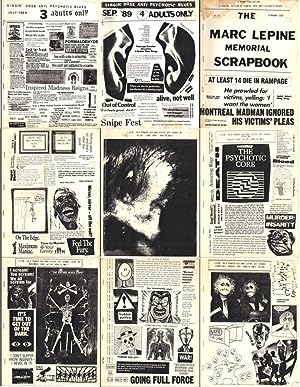 60+ pp. each. Scarce and important example of this phenomena of the zine world. Frank claimed to be a psychopath, planning some kind of big mass murder. While he smoldered, he wrote these zines and sent them, rather inexpensively, to zinesters. He was a good correspondent, writing long letters in blood-red pen, always signed SINcerely and PSYCHOpathically yours. Later, zinesters began to realize that this self-proclaimed psychopath was much more than a mere faker or big talker. They started to think he was the FBI infiltration of the zine world. What a great idea, try to get leads on psychopaths via the zine world. He did get Mike Diana to submit some art for back cover and interiors. A lot of his clips came from gun magazines and what look like magazines for police and military. Whatever he was, these controversial zines are intriguing, and an important part of zine history. Frank disappeared just as suddenly as he appeared. A few videos of him are on the 'net. 9 Side stapled xerographic zines, with cardstock covers and a a couple of cardstock interior pages. Built to last. Readwear. Minor browning to covers. No. 5 has water stain on cover. No. 6 cover wrinkled. No. 8 has 1 pp. color xerox collage interior. Very good. Seller Inventory # 62607