A huge variety of marine monsters adorn the maps of the 13th and 14th centuries. There are monsters spouting water, monsters with huge tusks, monsters as big as islands, monsters that are hybrids of multiple creatures (both mythical and factual), and also mermaids, sirens and other humanoid creatures swimming around the oceans.

Maps from this era show how our knowledge of geography was growing but also show our lack of knowledge about large marine animals. Let's assume mariners did indeed see something monstrous in the surf and brought their accounts back to dry land. Whales were plentiful at this time. Blue whales are huge - 30 metres long and weighing 150-plus tonnes. It's easy to understand how a close encounter with a breaching whale becomes a close encounter with a sea monster.

And it's not just whales. Walruses are large, loud and possess fearsome tusks. A sea lion's head poking above the surface looks like a human face. Sharks are fearless hunters. Narwhals have unicorn-style horns. Manatees look like sea cows. With no cameras, these verbal accounts were exaggerated and went from being seafaring tales to being an important element in describing the known and unknown world.

Now consider what went before. In the Bible, Jonah is consumed by a whale. In Homer's Odyssey, Odysseus is waylaid by sirens and the Scylla. Sea monsters were documented by artists in antiquity including as far back as eight centuries before the birth of Christ. There's also the matter of precedent. If one mapmaker says there's nothing in the Atlantic except monsters (Matthew Paris' map of Britain circa 1250 describes the Atlantic as "A vast sea where there is nothing but the abode of monsters."), are you brave enough to produce a map that says otherwise? There's also the fact that ships have a long history of simply disappearing.

And now let's take another view. Mapmakers were in the business of selling maps and maps with monsters are more interesting than ones without. Even the greatest mapmakers, most concerned with getting the geography correct, used monsters. It's awfully tempting to decorate tracts of ocean with monsters in order to charge a higher price. 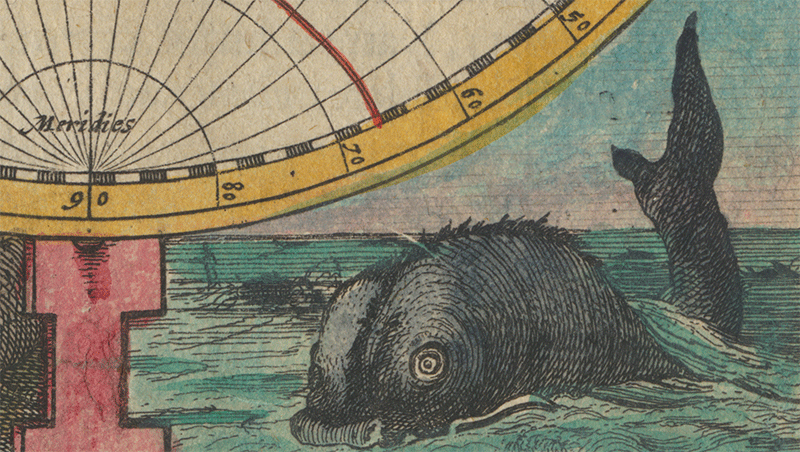 However, the motivation for placing monsters on maps doesn't matter. Monster-laden maps make geographical history more interesting. These monster-decorated maps looked good in the homes of wealthy noblemen in the 15th century and they look terrific today for people who love history.

The trend for adding monsters to maps waned in the final years of the 16th century. Images of whaling began to be used, showing man's mastery of nature. There was also the consideration that sea travel was vital. Important people, who wanted to encourage colonization of newly discovered lands, didn't want potential travelers scared off by a map showing a parade of saber-toothed monsters off the coast of America. 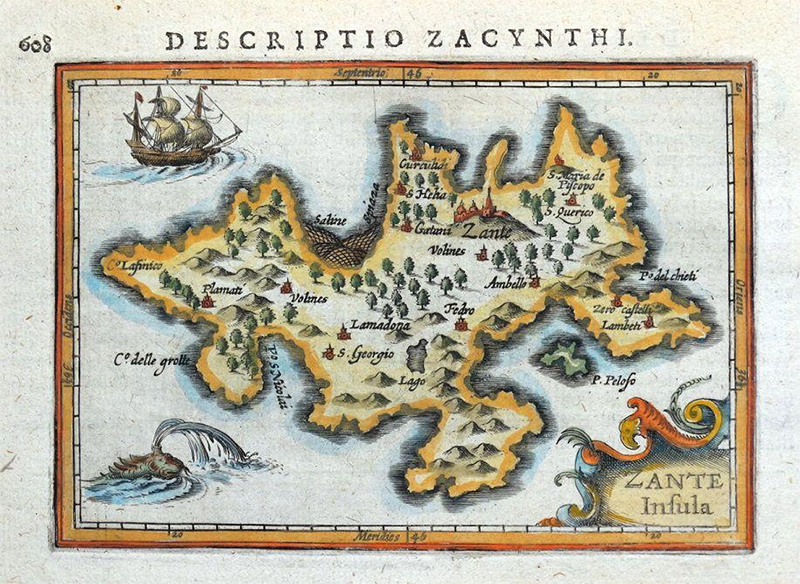 Published Amsterdam by Petrus Bertius, this is a miniature map of the Ionian Island. Zakynthos participated in the Trojan War, according to Homer, and was an important trading center for numerous rulers. It features a water-spouting scaled monster. Learn more 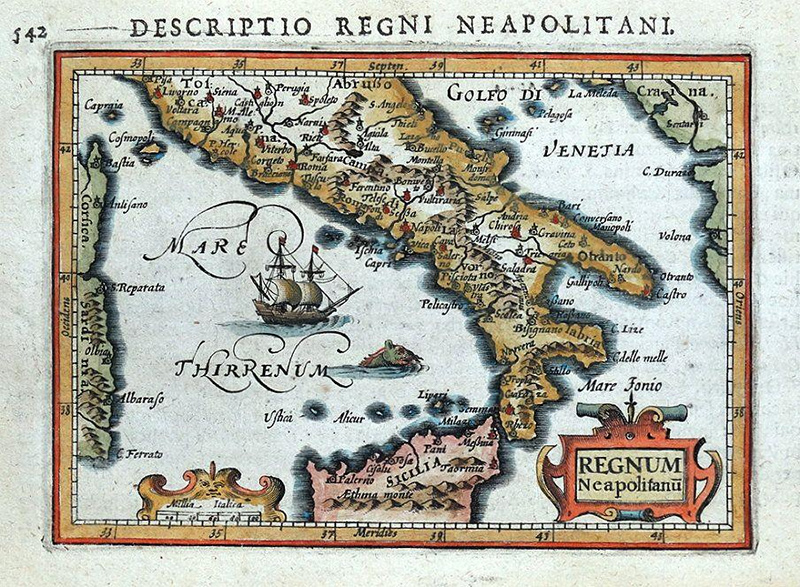 Another image from Petrus Bertius, this map of southern Italy shows a pleasant-looking monster. Naples has been inhabited since the Bronze Age. The story goes that the city was founded by a siren who failed to bewitch Odysseus. Learn more 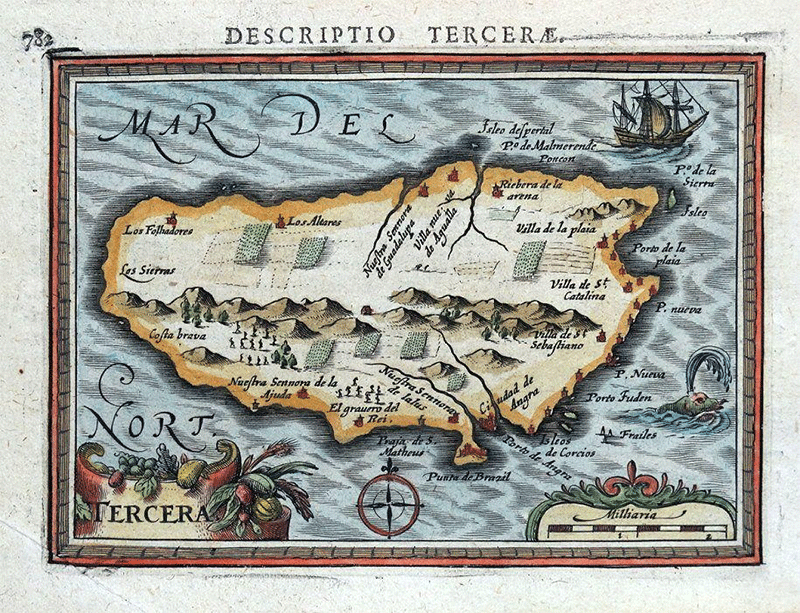 Terceira is an island in the Azores archipelago in the middle of the North Atlantic. It began appearing on sea charts in the 14th century. The Atlantic was a daunting prospect to many European sailors until it became clear that there was land and riches on the other side. Another map from Petrus Bertius. Learn more 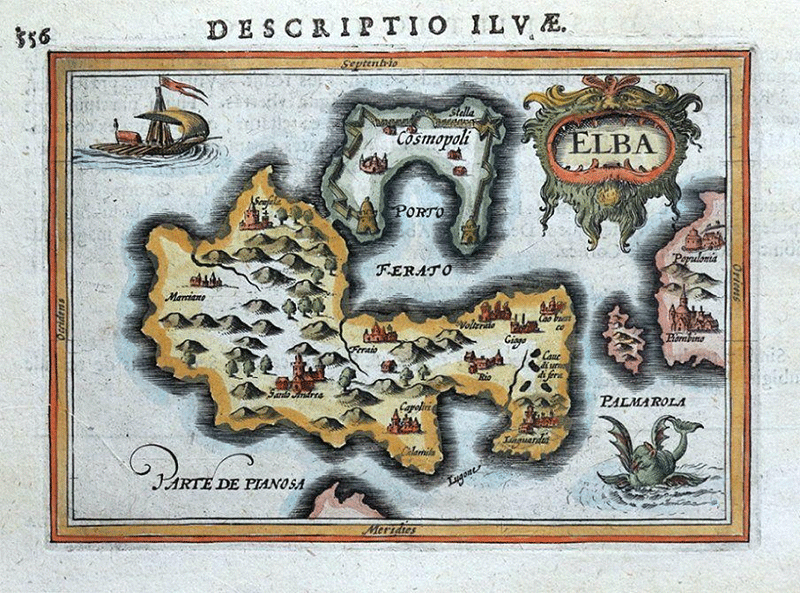 Napoleon was famously exiled on this Mediterranean island. It has a long history and has been ruled by every Tom, Dick and Harry from the Etruscans to the Romans and the Visigoths. This sea monster has dragon-like wings. Another miniature map from Petrus Bertius. Learn more 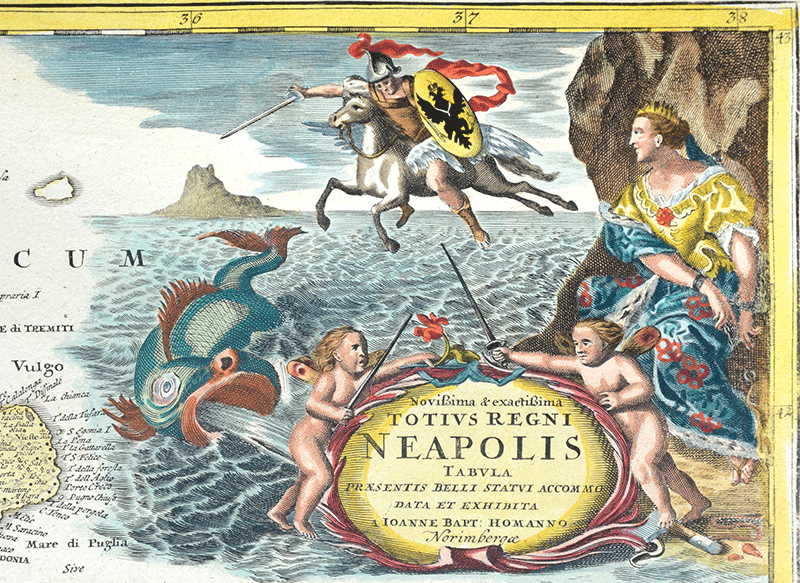 This is basically Southern Italy. The map was published in Nuremberg and the mapmaker, Johann Baptist Homann, added a sea monster to one of the map's two cartouches. A cartouche is an emblem in cartography. It may contain the name of the map, the date of publication, a motto, a coat of arms or details of the printer. They can be highly ornamental. This is a true example of a decorative sea monster. Learn more 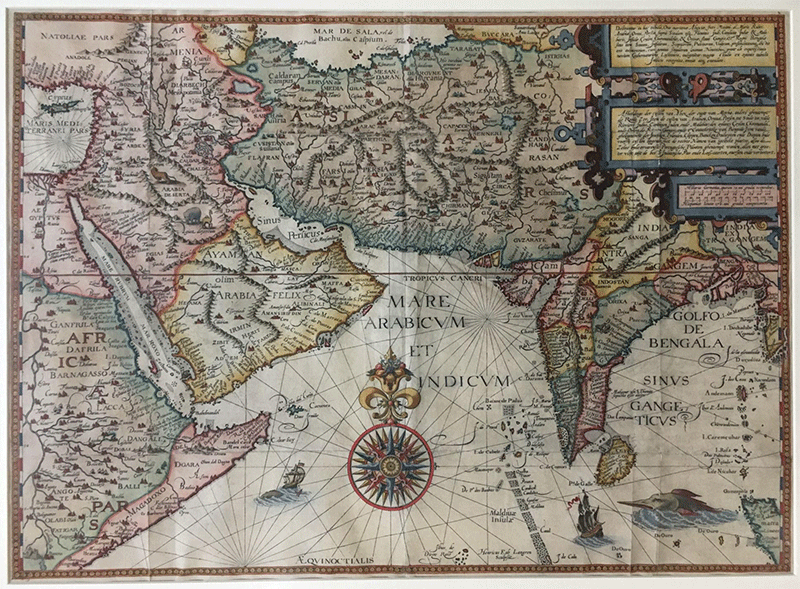 This beautiful copperplate engraving shows the Indian Ocean and Arabian Sea. Jan Huyghen van Linschoten (1563-1611), a Dutch historian and merchant, created this map. He spent 13 years living in India and travelled extensively. His maps paved the way for the Dutch trade routes to the East. This map features unicorns and a large swordfish-like sea monster bearing down on a ship. Learn more 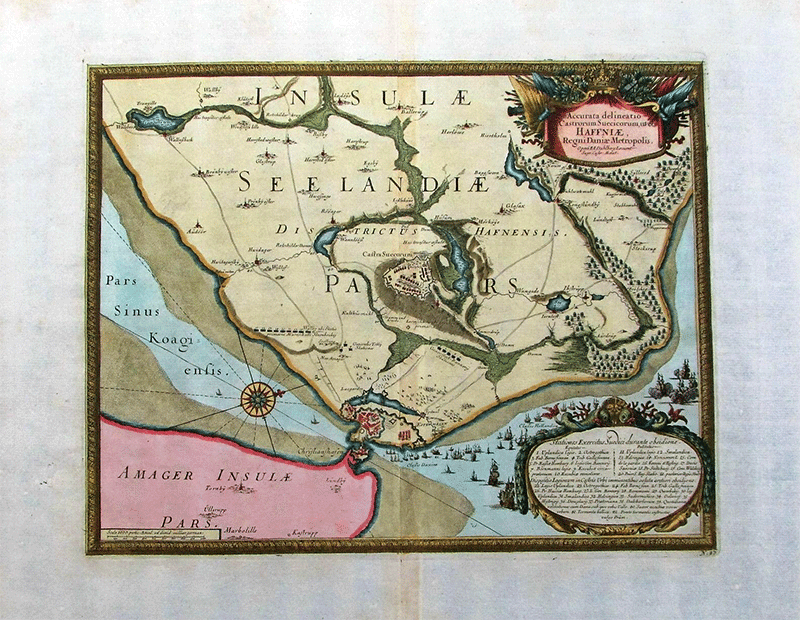 Zeeland is the westernmost part of the Netherlands, made up of islands and peninsulas. This late 17th century engraved map has an ornate sea monster in its cartouche. Learn more 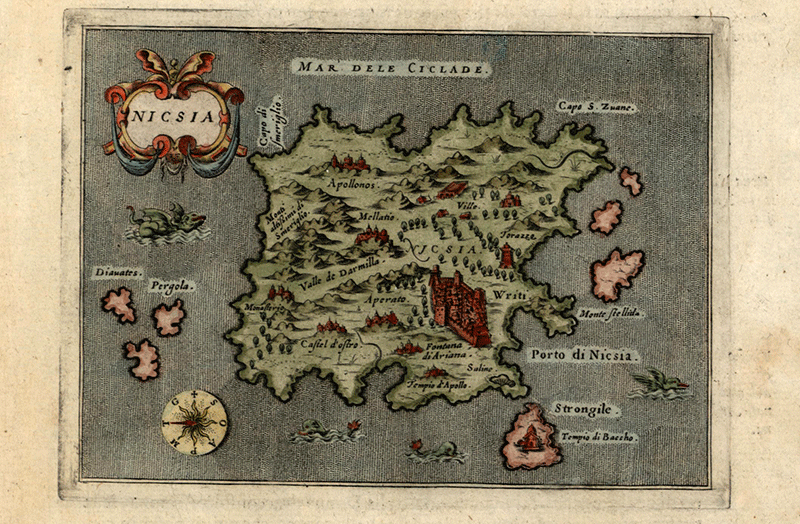 This Greek island must have been a grim place in the 17th century to earn four monsters from the mapmaker. Note the compass rose (that's the term for compasses displayed on maps), the cartouche and the castle on the island. Learn more 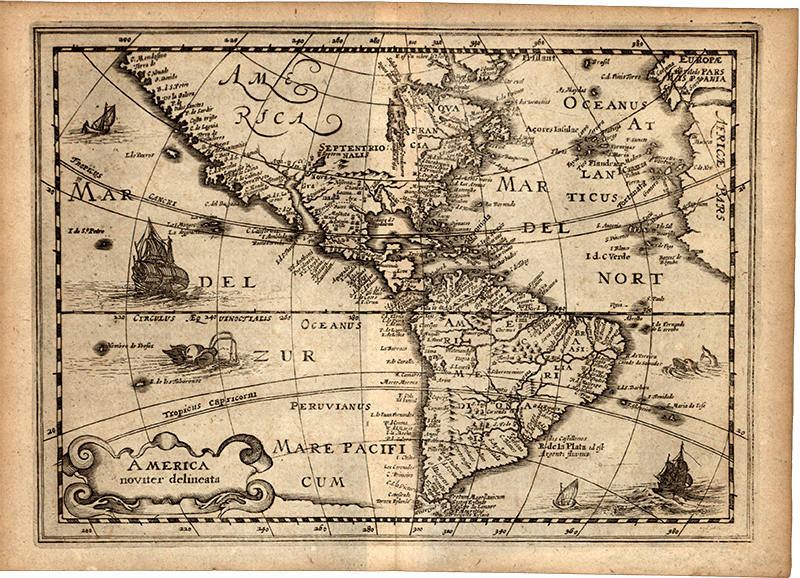 This 17th century map of the Americas shows numerous misconceptions about the New World. The non-existent islands of Friesland and Brasil are located in the Atlantic. It shows Lake Parime, the rumored location of El Dorado, the fabled city of gold. We're still looking for that one. The interior of America is blank for obvious reasons and the coastlines are highly inaccurate. With so much unknown, a sea monster naturally makes an appearance. Learn more 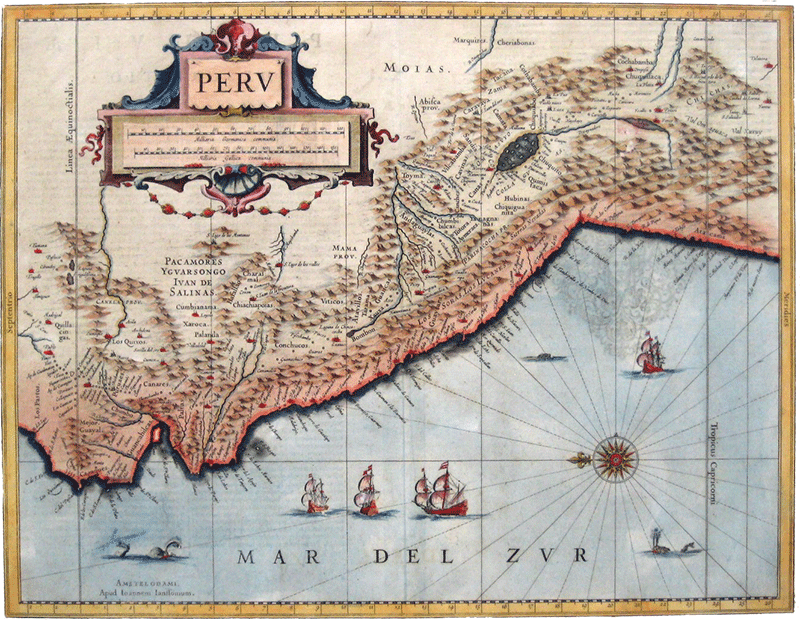 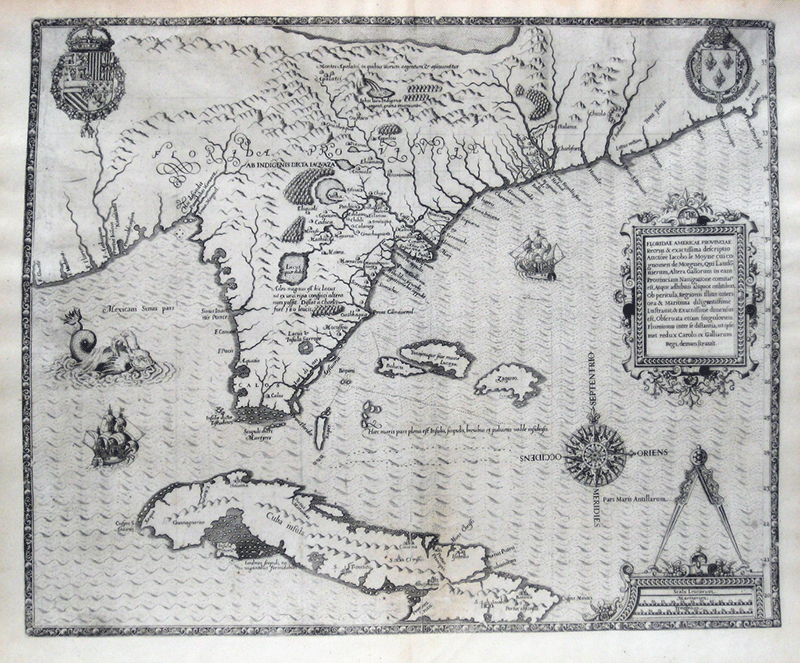 A map of the Eastern Seaboard from Cape Lookout to Florida, with Cuba and the Bahamas, published by Theodore de Bry in 1591. The map was drawn by the French artist Jacques Le Moyne de Morgues, who'd accompanied French explorer René de Laudonnière to Florida in 1564. The southernmost lake is labeled Lactus Insula Sarrope and most likely depicts Lake Okeechobee. To the north is a lake fed by an enormous waterfall, which may be Niagara. It shows Tampa Bay, gives a rough idea of the Florida Keys and the Everglades. Cuba is detailed with several cities, including Havana. The sea monster is a double-spouted creature. Learn more 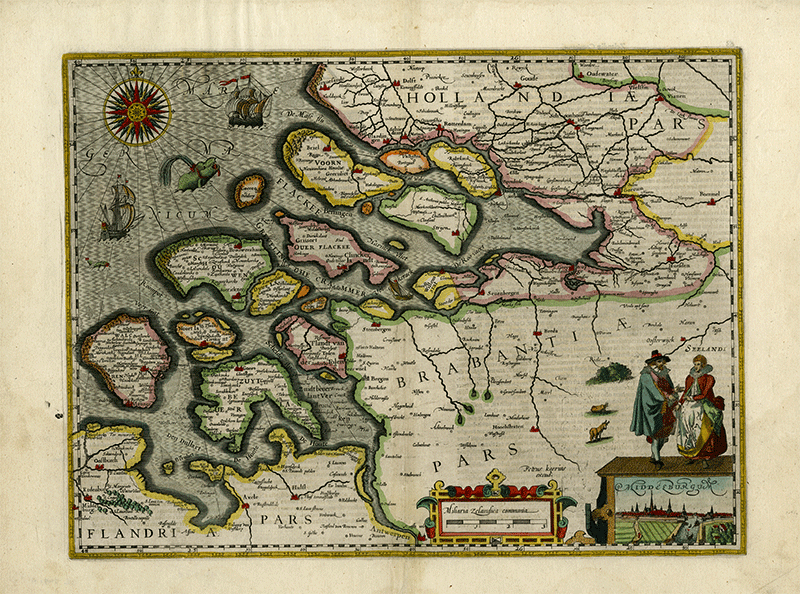 This map of the Dutch province of Zeeland shows a beautiful monster rearing out of the sea. Published in Amsterdam in a book by Petrus Kaerius (also known as Pieter van den Keere), a publisher and engraver who fled to England because of religious persecution. The compass rose has 32 points. Learn more 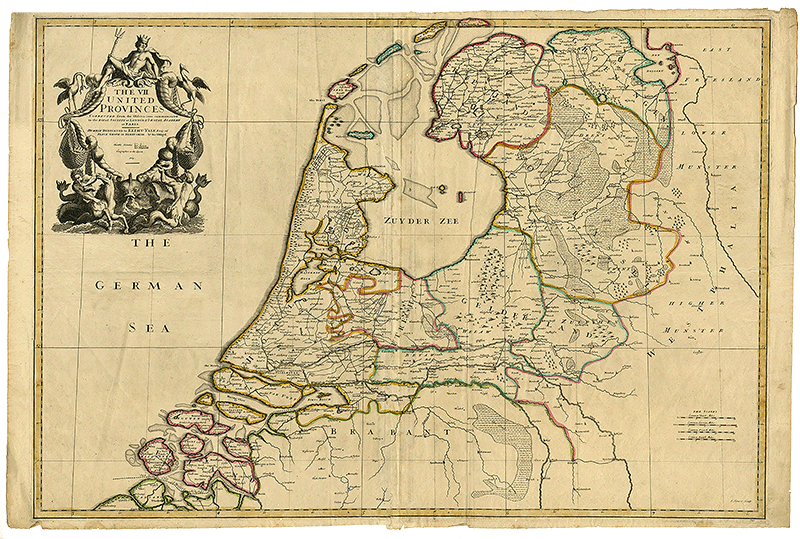 This map shows the seven provinces that comprised the Netherlands in 1709. There is detail of cities, towns, roads, forests, hills, rivers and canals. The North Sea (here called the German Sea) is filled with a magnificent cartouche featuring King Neptune, sea-horses, mer-men, a sea monster, and fishing nets full of fish. The map includes a dedication to Elihu Yale (1649-1721), an English merchant for whom Yale University is named. Learn more 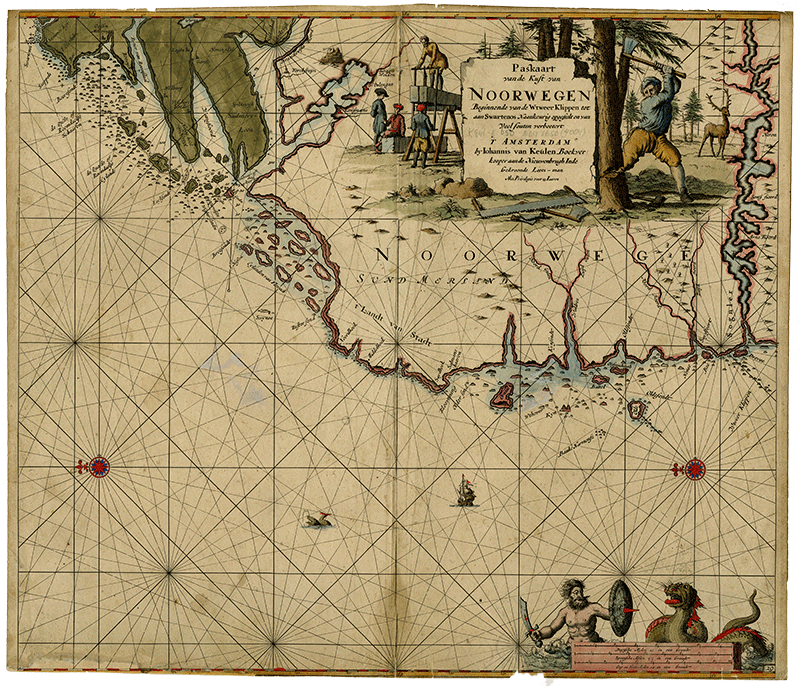 A sea chart of the Norwegian west coast. The large decorative cartouche show trees being felled and at the bottom there is a mythological figure fighting a sea monster. Learn more 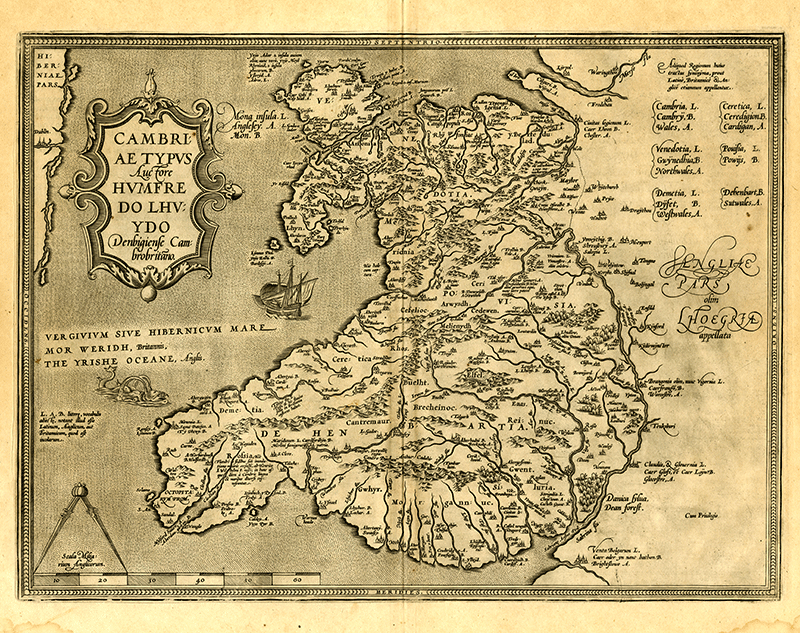 This decorative map shows Wales and Ireland, and includes a sea monster off the Pembrokeshire coast, which is perhaps the least likely location to encounter such a thing. The Irish Sea was, and still is, a busy route for shipping with Liverpool and Belfast being major centres for marine trade. Learn more 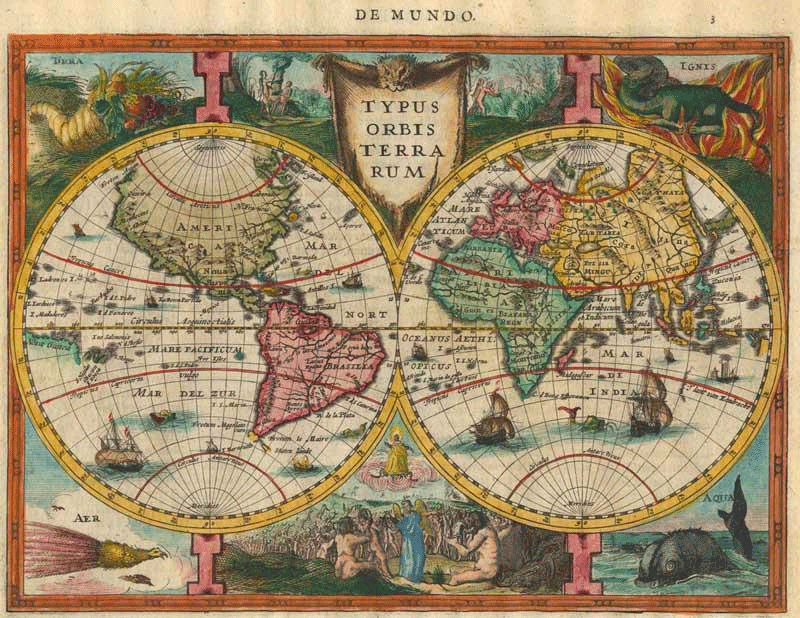 Printed in Amsterdam, this miniature map shows four continents. The sea monster appears in the decorative corner along with by a cornucopia, a bird of paradise, a salamander, and two scenes from the Garden of Eden and the Last Judgement. Learn more 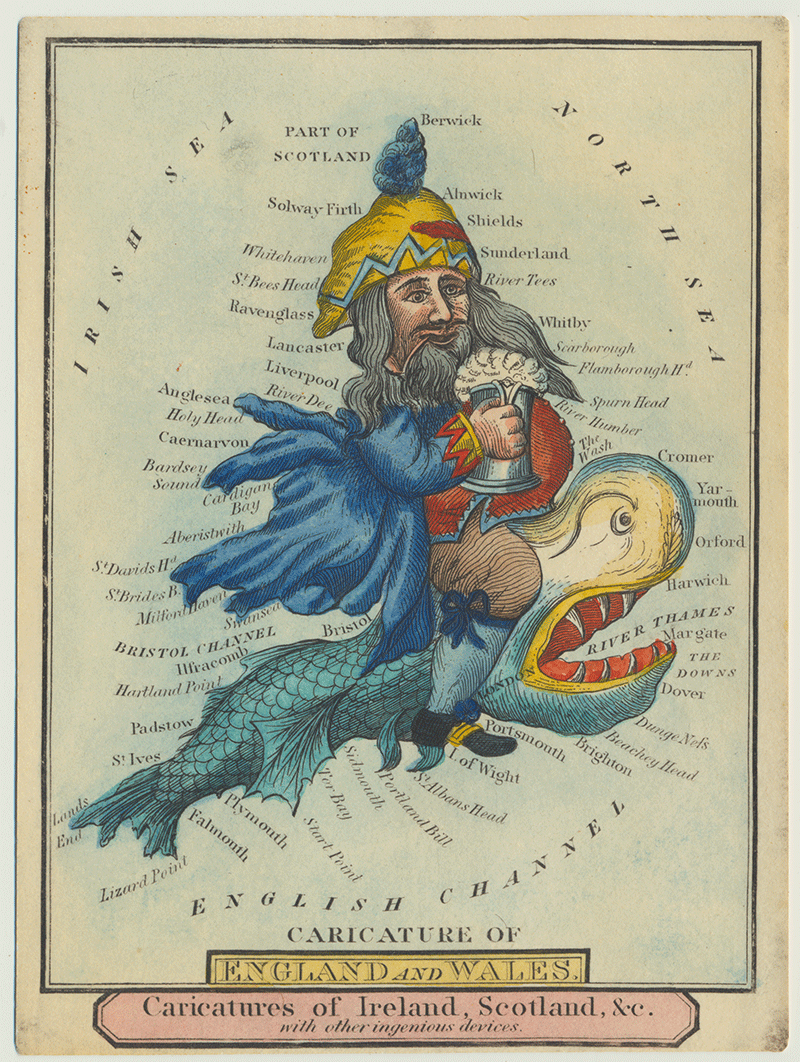 This is a caricature produced well after the golden age of sea monsters on maps. Robert Dighton's so-called 'Geography Bewitched' map shows England as a pot-bellied man with a foaming mug of beer in hand, sitting astride a scaly sea-monster. Learn more 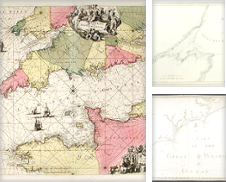 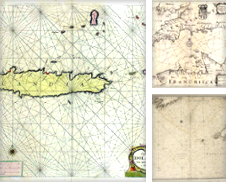 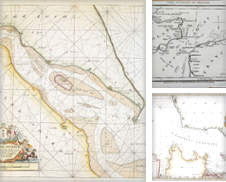 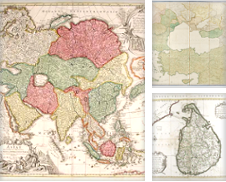