Items related to by all means: A ZEN CAUTIONARY TALE

Home Brown, Edward; drawings by by Margaret Koch; painting by ... by all means: A ZEN CAUTIONARY TALE
Stock Image 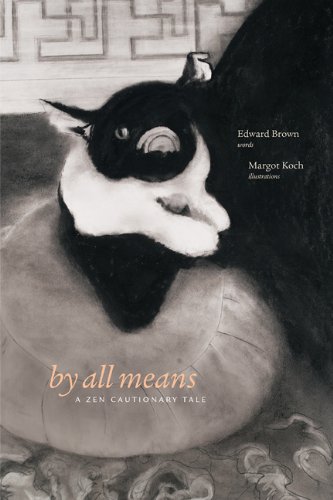 by all means: A ZEN CAUTIONARY TALE

Brown, Edward; drawings by by Margaret Koch; painting by Johnsimpkins

Title: by all means: A ZEN CAUTIONARY TALE

As the cover advises, this is a ''Zen Cautionary Tale.'' But against what exactly are we to be cautioned? The darkness that may lurk beneath the safe refuge of childhood memories? The ordinary life you may find yourself living after all the spiritual aspirations? The inevitable way every little thing in the universe is hitched to everything else (and time is not a one-way street)? Perhaps it's simply a warning that Zen practice could lead to talking with stuffed animals--and you don't know what they will say!

Edward Brown takes us on a winding tale through the real-life events of a stuffed piggy named Ponce, whose path suddenly crosses with that of an imaginary person, named, at times, Edward. The challenges of their everyday lives and lucid perceptions lead ultimately towards a most singular moment of enlightenment and mutual recognition.

Edward Brown has been practicing Zen since 1965 and also has done extensive vipassana practice, yoga, and chi gung. He leads regular sitting groups and meditation retreats in Northern California and offers workshops in the U.S. and internationally on a variety of subjects, including cooking, handwriting change, and Mindfulness Touch. Edward is an accomplished chef, who helped found Greens Restaurant in San Francisco and worked with Deborah Madison in writing The Greens Cookbook. Edward's other books include The Tassajara Bread Book, Tassajara Cooking, The Tassajara Recipe Book, and Tomato Blessings and Radish Teachings. He also edited Not Always So, a collection of Suzuki Roshi's lectures. In 2007, Edward was the subject of a critically acclaimed feature-length documentary film entitled How to Cook Your Life, directed by Doris Dorrie.