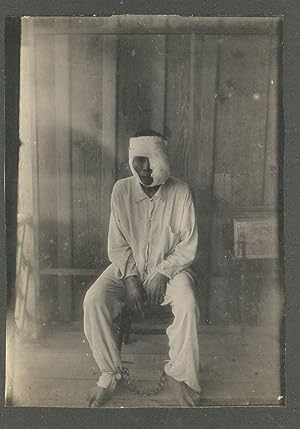 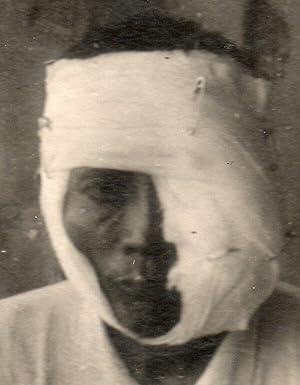 Mounted photograph of Papa Faustino, 8x6 inches. Rare. This is what defeat looks like, or at least so it did in the Philippines in 1907, when the revolt against the Spanish and the Americans was finally at end, for the insurgents. Faustino Ablen (fl. 1880-1907), Philippine religious and resistance leader, was still fighting against the American government seven years after the U.S. had claimed victory over the Spanish in the Philippines, and represented the last bit of Philippine resistance to American occupation and sovereignty. There are many stories regarding his final disposition some of which having the man escape into the woods to die an old man but from the look of Faustino in this picture it seems as though he was going nowhere, except for a short walk into the heart of darkness that would swallow him just after the photo was taken.+++On the one Faustino was a terrorist; on the other he was a patriot and holyman fighting for his country. He had fought the Spanish occupiers in the 1880 s until he was captured and imprisoned. After his release and following the American victory, he founded a religious/insurgent group the Pulahans--whose ultimate religious experience was to defeat the invaders or die trying. (From where I sit it seems as the requisite belief was death in battle for this struggle rather than the actual victory which was the benefit to the followers.) The Pulahans for the most part eschewed firearms and other modern weapons, launching themselves into battle with bolos, knives, and little else, hoping for hand-to-hand fighting. It is reported that there were 10,000-15,000 of these troops, making them a formidable army, frightening if you were one of the soldiers that they were going to attack.+++These post-war Pulahan Wars lasted from 1902 to 1907, ending with their leader s capture by Philippine Constabulary and the 8th U.S. Infantry.One of the few official reports on Faustino s capture was recorded in a legal document regarding jurisprudence in the arrest of the others who were with him that day. In U.S. v. Espiridion Rota et al (found in the Supreme Court Reports of the Philippine Islands, volume IX, published in Manila in 1908), the unfortunate story of the application of law to the other five men is told, as is the mention of Faustino s capture. It turns out that when the others were taken into custody and the wheels of justice began to turn, they all pleaded guilty, and charged with the crime of brigandage. Rota was sentenced to hanging and the others to imprisonment for 35 (+) years. Plus court costs. Their case was appealed because it was said the men had no idea what the guilty plea would get for them in the punishment phase; the Supreme Court upheld the conviction as well as the discipline, which was a little moot for Rota as he had already been hanged.+++ In June 11, 1907, US troops and scouts under Lt. Jones of the 8th infantry reportedly fired on four suspected outlaws. One was wounded and captured. He turned out to be Faustino Ablen. This was according to official reports. But according to Bartolome Ablen, grandson of Faustino's brother Gregorio, American troopers were patrolling in sityo Mahilawon, barangay Mahayag, in Ormoc, when they chanced upon the hut where Faustino lived with his wife and daughter. At that time, Faustino was taking a bath in a nearby spring. When the troopers came upon his wife, they asked her where Faustino was. Because he left word to tell anybody asking for him where he could be found, she told him where he could be found. Near the spring, one of the soldiers took his gun, aimed and fired. Faustino was hit in one of his eyes and fell. The shot was not however fatal. So they had to carry him in a sling down the mountain to Ormoc town where he was displayed to the populace. Then his captors whisked him away in a boat. His family never heard from him again. Bookseller Inventory # ABE-1476202168007

We have been in business since 1985--including a store in Georgetown, D.C. from 1985-2002--specializing in significant and hard-to-find works in modern (say, after 1850) physics, math, astronomy, and technology.


All items are offered with a seven-day return privilege.


We ship USPS priority unless otherwise specified and charge only for the exact cost of shipping. Overseas shipping depends upon the country of destination.