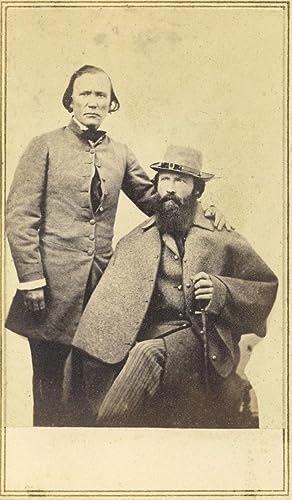 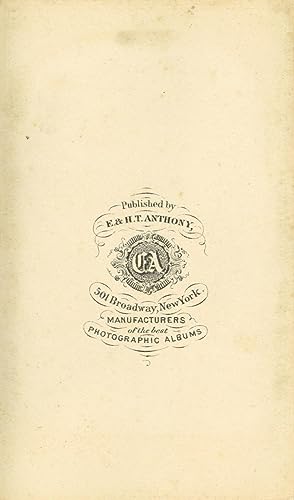 (Wild West) RARE CDV OF KIT CARSON AND EDWIN PERRIN. New York: E. & H. T. Anthony, [1862]. 4" x 2-3/8". EXCEEDINGLY RARE carte-de-visite, or CDV, of Kit Carson, at left in his Army frock coat and Edwin Perrin, seated with cane; taken in Albuquerque, New Mexico in January 1862. At the time of this photo, Carson was a colonel in the Union Army and the leader of the 1st New Mexico Volunteer Infantry. Perrin was a government expediter, sent to New Mexico in 1861 by the United States Secretary of War, Simon Cameron, on a secret mission to help arm New Mexico Civil War troops as the Union prepared for battle in the Southwestern Theater. Perrin worked closely with Carson in these efforts and remained with Carson's command in New Mexico through 1862. Kit Carson became a legend in his own lifetime thanks mainly to newspaper accounts and Government reports of his work as a guide for John C. Fremont's three western expeditions. Carson's varied career would include stints as a cook, a wagon driver, a mountain man and fur trapper, an Indian fighter, an Indian agent, a wilderness guide and an United States Army officer. He was married three times; his first two wives were Native American, his third was Mexican. From his three marriages he had ten children. He is buried in Taos, New Mexico next to his third wife, Josefa Jaramillo. The condition of the CDV is NEAR FINE. As stated previously, this CDV is EXCEEDINGLY RARE. Seller Inventory # 000712

Wallace & Clark, Booksellers specialise in fine and rare books with an emphasis on 19th and 20th century children's and illustrated books. We also inventory an extensive selection of original illustration art.


We accept checks and money orders denominated in U.S. dollars, as well as
MASTERCARD, VISA and PayPal. Institutions can be billed. Books may be returned
within 30 days of receipt for any reason.
Paul W. Clark, dba Wallace & Clark, Booksellers
6111 Hurst
Houston, TX 77008
USA
wallaceandclark@yahoo.com
Phone: 713-294-8424


Orders usually ship within 2 business days. Shipping costs are based on books weighing 2.2 LB, or 1 KG. If your book order is heavy or over-sized, we may contact you to let you know extra shipping is required.