Items related to Dunant's Dream: War, Switzerland and the History...

Caroline Moorehead Dunant's Dream: War, Switzerland and the History of the Red Cross

Dunant's Dream: War, Switzerland and the History of the Red Cross 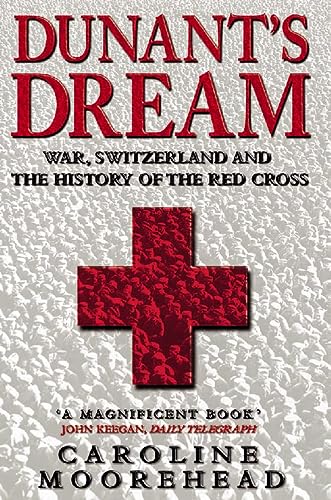 The Red Cross was the dream of the Swiss businessman Henri Dunant that grew into the pre-eminent international humanitarian charity. The story begins in 1859, when almost by chance, Dunant witnessed the butchery and lack of care for injured soldiers during the battle of Solferino. Realizing that, although modern warfare meant more, and worse, wounded, medical treatment for the first time could save significant numbers of them, he began a crusade leading to 137 national societies and 250 million members today. Caroline Moorehead, a popular columnist on human rights for the London Independent, is the first writer to be granted wide access to the Red Cross's closed archives in Geneva. Her resulting book engrossingly recounts the Red Cross's full history and the moral dilemmas it has faced from the two World Wars to the post-Cold War conflicts of Somalia, Chechnya, and Bosnia.

When vacationing Genevan businessman Henri Dunant arrived at the resort community of Solferino, Italy, in June 1859, he certainly did not expect to find the remains of a bloody battle, concluded earlier in the day, between the Austrians and the French. The casualties, over 6,000 of them, horrified Dunant. More shocking were the survivors, left unattended on the bloody battlefield, many of them severely wounded and near death. Overcome by the brutality of the scene before him, Dunant organized and led a team of volunteers that systematically cared for the wounded. Within five years, he and four other prosperous Swiss citizens formed the International Committee for Relief to the Wounded and drafted the first Geneva Convention.

Renamed in 1876 the International Committee of the Red Cross, the organization today comprises 137 national societies and 250 million members. The Committee that governs it, however, has changed little since the 1870s. According to Caroline Moorehead, author of Dunant's Dream: War, Switzerland and the History of the Red Cross, the power to monitor and criticize all governments of the world remains "in the hands of a small band of co-opted, elderly Swiss lawyers and bankers." While the International Committee has operated staunchly on its self-prescribed principles throughout the 20th century, many of its decisions, actions, and instances of inaction have been ambiguous and seemingly motivated by politics. In Dunant's Dream, Moorehead, a London-based journalist, presents a scrutinizing yet balanced history of the organization. Despite its length, Dunant's Dream makes no attempt to be comprehensive. Instead, Moorehead, her argument supported by unprecedented access to private Red Cross archives in Geneva, analyzes the conflicts, issues, and moral dilemmas from over 130 years of war and natural disasters that have had the most determining effect on the growth of the modern Red Cross. --Bertina Loeffler Sedlack

An eloquent examination of the evolution of the Red Cross from its modest inception in the mid-19th century to its present status as the world's preeminent relief organization. In 1859, Henri Jean Dunant, age 31, an idealistic scion of a prosperous Swiss family, visited the battlefield at Solferino, Italy, where in a single day 6,000 had died and more than 30,000 had been wounded. Horrified by the suffering he witnessed and by the inability of the medical personnel to cope with the sheer numbers of victims and the gravity of wounds, Dunant published A Memory of Solferino (1862), a book whose graphic battlefield descriptions appalled and animated its myriad readers. By 1863 the society that would become the Red Cross was born. Dunant's Dream is a masterwork, a book of immense power and consequence. Moorehead, a columnist for the Independent in England (Bertrand Russell: A Life, 1993, etc.), the first researcher allowed to explore the archives of the International Committee of the Red Cross in Geneva, has emerged to tell a compelling storyboth broad in scope and rich in illuminating detail, both compassionate and critical, poignant and depressing (humanity's inhumanity has rarely been so sharply delineated). On display are Moorehead's comprehensive knowledge of world history and politics; her formidable scholarship; her lucid, felicitous style; and her impressive ability to make comprehensible the most complicated international conflicts, the most enigmatic personalities. Unafraid to censure, she repeatedly calls the organization to account for its relative silence during the Holocaust and for the conservative ``stodginess'' that has sometimes made it slow to adapt to crises. Most riveting are Moorehead's stories of the quiet heroism of individual Red Cross volunteersnurses, surgeons, stretcher-bearers, ambulance driverswho have struggled at enormous personal risk to bring relief to soldiers, refugees, orphans, political prisoners, victims of natural disastersto all who recognize the Red Cross as a symbol of hope. Dunant's Dream is a major work by a gifted writer. (32 pages photos) -- Copyright ©1999, Kirkus Associates, LP. All rights reserved.

1. Dunant's Dream: War, Switzerland and the History of the Red Cross

2. Dunant's Dream: War, Switzerland and the History of the Red Cross