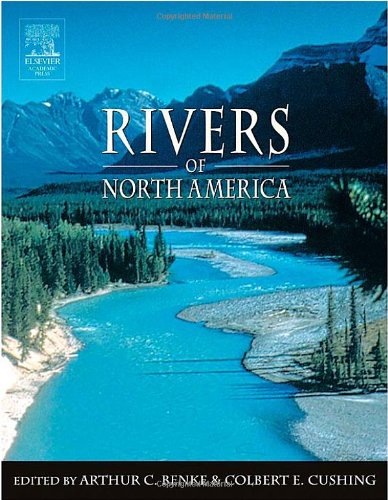 Best Reference 2005, by the Library Journal

Rivers of North America is an important reference for scientists, ecologists, and students studying rivers and their ecosystems. It brings together information from several regional specialists on the major river basins of North America, presented in a large-format, full-color book. The introduction covers general aspects of geology, hydrology, ecology and human impacts on rivers. This is followed by 22 chapters on the major river basins. Each chapter begins with a full-page color photograph and includes several additional photographs within the text. These chapters feature three to five rivers of the basin/region, and cover several other rivers with one-page summaries. Rivers selected for coverage include the largest, the most natural, and the most affected by human impact.

This one-of-a-kind resource is professionally illustrated with maps and color photographs of the key river basins. Readers can compare one river system to another in terms of its physiography, hydrology, ecology, biodiversity, and human impacts.

"This group of authors includes most of the leading experts in the ecology of North American rivers. They have provided a starting point for investigating our rivers and given us the tools for understanding how our rivers function. Now it is time for us to get to work!"
-David R. Lenat, Raleigh, North Carolina, JOURNAL OF NORTH AMERICAN BENTHOLOGICAL SOCIETY

"Clearly a massive undertaking, the work consolidates facts about individual rivers, from geomorphology, hydrology, and water chemistry to biodiversity and ecology...The book's foreword was written by Robert F. Kennedy Jr. in his capacity as president of the Waterkeeper Alliance, an environmental organization focused on protecting rivers. As he says about the book, 'you will find a few remaining pristine rivers that deserve conservation as benchmark systems.' On the other hand, he notes that a reader will also find that some North American rivers 'have major problems...for which radical and immediate CPR is required.' The book indeed has details about the environmental good and bad for virtually all the continent's major rivers. Art Benke and Bert Cushing have produced a monumental work that will serve as a basic comparative reference for many years. The book is also useful for people who want to reminisce about their favorite rivers."
- Whit Gibbons, in AIKEN STANDARD

"...the first comprehensive effort to detail the current state of the continent’s rivers. This marvelous resource began as a coffee-table book. Four years later, ambitiously expanded, it covers more than 200 rivers, from southern Mexico to the Arctic. Its 22 chapters, written by scientists and hydrologists, discuss specific basins or regions such as the Colorado River Basin and the Pacific Coast rivers of Canada and Alaska. Rivers describes the physiography, geomorphology, hydrology, biodiversity and ecology of each system, in addition to detailing human impacts and special features. Winner of a 2005 Award for Excellence in Projects and Scholarly Publishing by the Association of American Publishers and a Library Journal Best Reference Work citation, this large-format, full-color volume contains copious maps and illustrations...The well-organized book conveys the 'bewildering heritage' of the continent’s rivers and examines contemporary challenges."
- Irene Wanner for HIGH COUNTRY NEWS

"This unique and beautifully illustrated volume fills a gap in the reference literature of conservation biology, geography, geology, ecology, and hydrology by providing information on more than two hundred rivers...A particularly valuable and attractive feature of the book is its detailed maps of each river system, created from data held in the major cartographic datasets of the US Geological Survey, Canada's GeoGratis, and Mexico's Hydrolk Elevation Derivative Database...this book should be acquired by all public library systems, museum libraries, regional historical societies and special collections, corporate libraries in firms involved with river management, and college and university libraries supporting undergraduate and graduate programs in biology, conservation ecology, hydrology, geography, geology and agriculture."
- Robert Ridinger, Electronic Information Resources Management, Northern Illinois University, for E-STREAMS

"This outstanding reference comprehensively evaluates the status of over 200 major North American river systems from southern Mexico to the Arctic...Each chapter has the same format, which allows readers to compare a river's physical, biological, hydrological, and ecological characteristics with those in other regions. All chapters contain an introduction describing basin landscape, physiographic and climatic attributes; a one page summary on up to 12 rivers, including a basin map and graphs of mean monthly temperature, precipitation, and runoff; and expanded text, augmented by color photographs, for up to five 'focus' rivers per chapter...Of special value is the detailed information provided in the one-page river summaries...Each page summary lists major information sources and literature cited. Color photographs of representative river systems that accompany each chapter vividly illustrate the diversity of rivers on the continent. This book contains an enormous amount of excellent information that is not available from any other single source. It should become a standard reference on North American rivers. Scientists, conservationists, politicians, students, and the general public will use this work extensively. This high-quality publication is a new source of knowledge about a most valuable natural resource...Summing up: Essential. All libraries; all levels."
- M. J. Zwolinski, University of Arizona, in CHOICE

"This comprehensive synthesis provides the first interdisciplinary perspective on the regional characteristics of rivers and associated ecosystems...This treatise will be an invaluable reference and benchmark for biologists, hydrologists, planners, and policy makers for many years to come."
- Alan P. Covich, Professor and Director, Institute of Ecology, University of Georgia

"Grand in design and even grander in scope and execution, Rivers of North America will shape our collective thinking about North American rivers and watersheds. Here is an indispensable guide to the geography, ecology, and status, including pressures from human actions, of rivers from the Canadian Arctic to Mexico. Superb graphics and stunning photographs enrich the book’s wealth of scientific detail."
- James R. Karr, Professor, University of Washington, Seattle

"Rivers of North America is a landmark contribution to the scientific study of flowing waters in North America. It is both authoritative and comprehensive, and could be as useful on a cross-country trip as in a personal library for reading and reference."
- William M. Lewis, University of Colorado, Boulder

"This book is astonishingly encyclopedic in scope and condenses the wisdom and insight of regional experts into readable syntheses and informative one-page fact sheets for North America's rivers. It is an entryway to further scientific information on over 200 individual rivers and will be an invaluable resource for professionals as well as concerned citizen groups."
- Judy L. Meyer, Distinguished Research Professor of Ecology, University of Georgia

"Rivers of North America is an extremely valuable volume on our major continental rivers...Clearly, this is a volume that all devotees of rivers--scientists, resource managers, anglers, boaters, and the lay reader--definitely will want to own."
- Kenneth W. Cummins, Co-Director, Institute for River Ecosystems, Humboldt State University, Arcata, California

“This volume is a must for rivers scientists, conservationists, paddlers, river recreationists, sports fishermen--for anyone and everyone concerned about the future of the continent’s most valuable natural resource. It should be the standard reference on North American rivers for a long time to come.
- Robert F. Kennedy, Jr., President, Waterkeeper Alliance, from the Foreword

"I have just had the opportunity to examine the pre-publication version containing the first 15 chapters of Rivers of North America. I was blown away by its thoroughness, logical and consistent organization, overall “eye appeal, and sheer size. This is truly an outstanding book, especially for one so loaded with factual information! This is the first comprehensive coverage of the rivers of North America and is unique in its ecological focus. Not only that but it also is masterful in its content and design. The individual chapters, on specific regions, are chock full of facts and contain abundant references to additional information. They also are copiously illustrated, mostly in color, including a full-page photograph of a representative river and a locator map of each river covered. I was especially impressed with the single-page synopses of individual rivers at the end of each chapter, containing thumbnail descriptions of physical and biological features; graphs of monthly temperature, precipitation, and runoff; and a color topographic map of each basin.

In summary, this is an outstanding reference source and essential guide to what is and what is not known of the principal rivers on this continent. Anyone interested in rivers and their conservation will want to have a copy within easy reach."
-Wayne Minshall, Professor Emeritus, Idaho State University

Buy Used
Condition: Near Fine
Overall Near Fine condition no... Learn more about this copy

Book Description Academic Press, 2005. Hardcover. Condition: VERY GOOD. Pages are intact and are not marred by notes or highlighting, but may contain a neat previous owner name. The spine remains undamaged. Supplemental materials are not guaranteed with any used book purchases. Seller Inventory # 0120882531_abe_vg

Book Description Academic Press, 2005. Condition: Good. A+ Customer service! Satisfaction Guaranteed! Book is in Used-Good condition. Pages and cover are clean and intact. Used items may not include supplementary materials such as CDs or access codes. May show signs of minor shelf wear and contain limited notes and highlighting. Seller Inventory # 0120882531-2-4