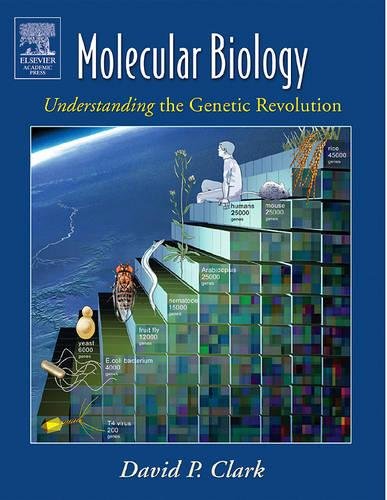 Molecular biology is a fast-paced field that constantly provides new insights into the living world and the role of humans within it. Students and professionals need a clear understanding of new discoveries and applications, as well as a firm grasp of the fundmental concepts. Clark's Molecular Biology: Understanding the Genetic Revolution gives readers what they need in both regards.Clark effectively introduces basic concepts followed by more specific applications as the text evolves. He has included research results as current as late 2004 when the gene count for humans was officially changed, and takes a thorough look at the medical, agricultural, and social aspects that shape modern-day molecular biology. This text is written in a straightforward manner and beautifully illustrated in full color.Molecular Biology covers a deliberately broad range of topics to show that molecular biology is not applicable merely to human medicine and health, but also appl

David P. Clark did his graduate work on bacterial antibiotic resistance to earn his Ph.D. from Bristol University, in the West of England. During this time, he visited the British Government's biological warfare facility at Porton Down and was privileged to walk inside the (disused) Black Death fermenter. He later crossed the Atlantic to work as a postdoctoral researcher at Yale University and then the University of Illinois. David Clark recently retired from teaching Molecular Biology and Bacterial Physiology at Southern Illinois University which he joined in 1981. His research into the Regulation of Alcohol Fermentation in E. coli was funded by the U.S. Department of Energy, from 1982 till 2007. From 1984-1991 he was also involved in a project to use genetically altered bacteria to remove contaminating sulfur from coal, jointly funded by the US Department of Energy and the Illinois Coal Development Board. In 1991 he received a Royal Society Guest Research Fellowship to work at Sheffield University, England while on sabbatical leave. He has supervised 11 master’s and 7 PhD students and published approximately 70 articles in scientific journals. He has written or co-authored several textbooks, starting with Molecular Biology Made Simple and Fun (with Lonnie Russell; (Cache River Press, First edition, 1997) which is now in its fourth edition. Other books are Molecular Biology and Biotechnology (both published by Elsevier) He recently wrote a popular science book, Germs, Genes, & Civilization: How Epidemics Shaped Who We Are Today (2010, Financial Times Press/Pearson). David is unmarried, but his life is supervised by two cats, Little George and Mr Ralph.