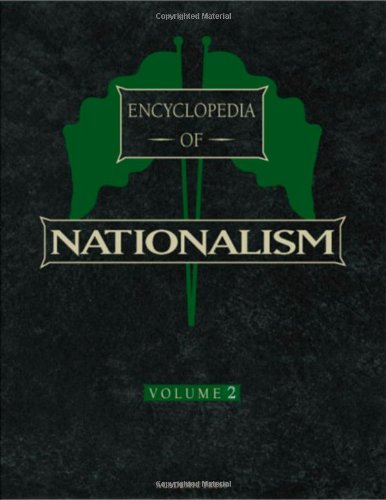 Nationalism has unexpectedly become a leading local and international force since the end of the Cold War. Long predicted to give way to pan-national or economic organizations, nationalism exerts its tremendous force on all continents and in a wide variety of ways. The Encyclopedia of Nationalism captures the aims and scope of this force through a wide-ranging examination of concepts, figures, movements, and events. It is the only encyclopedic study of nationalism available today.

Alexander J. Motyl is Deputy Director of the Center for Global Change and Governance as well as Associate Professor of Political Science at Rutgers University. The former Associate Director of the Harriman Institute, he has written about Ukranian, Soviet, and post-Soviet subjects for newspapers, magazines, and scholarly publications. He received his Ph.D. from Columbia University and regularly lectures to audiences worldwide.

"The Encyclopedia of Nationalism fills a serious gap in reference material on one of the most important issues facing the world today. It is an essential tool for scholars, journalists, and public officials."
―JACK F. MATLOCK, JR., George Kennan
Professor, Institute for Advanced Study, Princeton, New Jersey

"Nationalism is a topic as important and fascinating as it is notoriously resistant to comprehensive analysis. Alex Motyl's Encyclopedia of Nationalism avoids the hopeless task of providing an authoritative
compendium of what is known or agreed upon. Instead this marvelously illuminating work offers an imaginative and wide-ranging array of outstanding essays. Individually they trace the varieties of assumptions, questions, and answers that scholars from virtually every discipline in the humanities and social sciences have advanced to further our understanding of some aspect of this protean phenomenon. Together they show how rich are the possibilities for joining insights from disparate approaches whose paths of inquiry intersect on the rough terrain of nationalism. As a reference work this is scholarship of a very high order--a must for every college and university library and a valuable resource for specialists."
―Ian Lustick, University of Pennsylvania

"The present two-volume encyclopedia ... is an ambitious effort to cover the main features of the debate [surrounding nationalism] and a valuable aid to students needing a summary of issues and critical comparison of rival theories."
SECURITY DIALOGUE