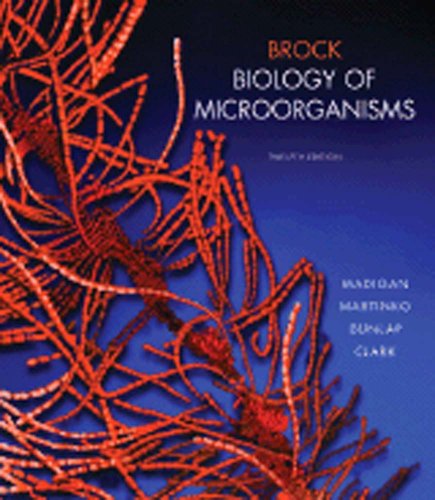 The authoritative text for introductory microbiology, Brock Biology of Microorganisms continues its long tradition of impeccable scholarship, outstanding art and photos, and accuracy.  It balances the most current coverage with the major classical and contemporary concepts essential for understanding microbiology.  The authors’ clear, accessible writing style speaks to today’s students while maintaining the depth and precision science majors need.

Michael T. Madigan received a bachelor’s degree in biology and education from Wisconsin State University at Stevens Point in 1971 and M.S. and Ph.D. degrees in 1974 and 1976, respectively, from the University of Wisconsin, Madison, Department of Bacteriology. His graduate work centered on hot spring phototrophic bacteria under the direction of Thomas D. Brock. Following three years of postdoctoral training in the Department of Microbiology, Indiana University, where he worked on phototrophic bacteria with Howard Gest, he moved to Southern Illinois University Carbondale, where he has been a Professor of Microbiology for nearly 30 years. He has coauthored Biology of Microorganisms since the fourth edition (1984) and teaches courses in introductory microbiology, bacterial diversity, and diagnostic and applied microbiology. In 1988 he was selected as the outstanding teacher in the SIU College of Science and in 1993 its outstanding researcher. In 2001 he received the university’s Outstanding Scholar Award. In 2003 he received the Carski Award for Distinguished Undergraduate Teaching from the American Society for Microbiology. His research has primarily dealt with anoxygenic phototrophic bacteria, especially species that inhabit extreme environments, and he has graduated over 20 Masters and Ph.D students. He has published over 110 research papers, has coedited a major treatise on phototrophic bacteria, and has served as chief editor of the journal Archives of Microbiology. He currently serves on the editorial board of the journal Environmental Microbiology. His nonscientific interests include tree planting and caring for his dogs and horses. He lives beside a quiet lake about five miles from the SIUC campus with his wife, Nancy, four shelter dogs (Gaino, Snuffy, Pepto, and Merry), and three horses (Springer, Feivel, and Festus).

John M. Martinko received his B.S. in biology from The Cleveland State University. As an undergraduate student he participated in a cooperative education program, gaining experience in several microbiology and immunology laboratories. He worked for two years at Case Western Reserve University, conducting research on the structure, serology and epidemiology of Streptococcus pyogenes. He did his graduate work at the State University of New York at Buffalo, investigating antibody specificity and antibody idiotypes for his M.A. and Ph.D. in microbiology. As a postdoctoral fellow, he worked at Albert Einstein College of Medicine in New York on the structure of major histocompatibility complex proteins. Since 1981, he has been in the Department of Microbiology at Southern Illinois University Carbondale where he is an Associate Professor and Director of the Molecular Biology, Microbiology, and Biochemistry Graduate Program. His current research involves manipulating immune reactions by inducing structural mutations in single-chain peptide-major histocompatibility protein complexes.  He teaches undergraduate and graduate courses in immunology and he also teaches immunology, host defense, and infectious disease topics in a general microbiology course as well as to medical students.  He has been active in educational outreach programs for pre-university students and teachers.  For his educational efforts, he won the 2007 Southern Illinois University Outstanding Teaching Award.  He is also an avid golfer and cyclist.  John lives in Carbondale with his wife, Judy, a high school science teacher.

PAUL V. DUNLAP received his B.S. degree in microbiology from Oregon State University in 1975.  As an undergraduate student, he participated in research in marine microbiology in the laboratory of R.Y. Morita and served in his senior year as a teaching assistant for courses in microbiology, gaining experience in laboratory and field research and in teaching.  He then taught English in Japan until 1978, when he returned to the United States for graduate studies in biology with J.G. Morin at UCLA.  Research for his Ph.D. degree, awarded in 1984, addressed the ecology and physiology of bioluminescent symbiosis.  He then moved to Cornell University in Ithaca, New York, for post-doctoral studies with E.P. Greenberg on the genetic regulation of bacterial luminescence.  In 1986 he joined the faculty at New Mexico State University, and in 1989 moved to the Biology Department at the Woods Hole Oceanographic Institution, where he worked for several years on quorum sensing and symbiosis in luminous bacteria before moving in 1996 to the University of Maryland’s Center of Marine Biotechnology in Baltimore.  In 2001, he joined the faculty of the University of Michigan in Ann Arbor, where he is an Associate Professor in the Department of Ecology and Evolutionary Biology.  His research focuses on the systematics of luminous bacteria, microbial evolution, bioluminescent symbiosis, and quorum sensing.  He teaches a large undergraduate majors course in introductory microbiology and a senior/graduate level course in microbial diversity.  His nonscientific interests include family history research and the practice of aikido, a Japanese martial art.  He lives in Ann Arbor with his wife, daughter, and their Australian terrier.

DAVID P. CLARK grew up in Croydon, a London suburb. He won a scholarship to Christ's College, Cambridge where he received his B.A. degree in natural sciences in 1973. In 1977 he received his Ph.D. from The University of Bristol, Department of Bacteriology, for work on the effect of cell envelope composition on the entry of antibiotics into Escherichia coli. He then left England to become a postdoctoral researcher studying the genetics of lipid metabolism in the laboratory of John Cronan at Yale University. A year later he moved with the same laboratory to the University of Illinois at Urbana-Champaign. He joined the faculty of Southern Illinois University Carbondale in 1981. His research has focused on the growth of bacteria by fermentation under anaerobic conditions. He has published over 70 research articles and graduated over 20 Masters and Ph.D students. In 1989 he won the College of Science Outstanding Researcher Award. In 1991 he was the Royal Society Guest Research Fellow at the Department of Molecular Biology and Biotechnology, The University of Sheffield, England. He is the author of two books: Molecular Biology, Made Simple and Fun, now in its third edition, and Molecular Biology, Understanding the Genetic Revolution. He is unmarried and lives with two cats, Little George, who is orange and very nosey, and Mr. Ralph, who is mostly black and eats cardboard.

Book Description Pearson, 2005. Condition: Fair. This is an ex-library book and may have the usual library/used-book markings inside.This book has soft covers. In fair condition, suitable as a study copy. Please note the Image in this listing is a stock photo and may not match the covers of the actual item,2300grams, ISBN:9780131968936. Seller Inventory # 8362674

Book Description Prentice Hall, 2006. Condition: Fair. This is an ex-library book and may have the usual library/used-book markings inside.This book has soft covers. In fair condition, suitable as a study copy. Please note the Image in this listing is a stock photo and may not match the covers of the actual item,2350grams, ISBN:9780131968936. Seller Inventory # 8018476

Book Description Prentice Hall, 2006. Condition: Good. This is an ex-library book and may have the usual library/used-book markings inside.This book has hardback covers. In good all round condition. No dust jacket. Re-bound by library. Please note the Image in this listing is a stock photo and may not match the covers of the actual item,2600grams, ISBN:0131968939. Seller Inventory # 8018477

Book Description Pearson, 2005. Condition: Poor. This book has soft covers. Ex-library, With usual stamps and markings, In poor condition, suitable as a reading copy. Please note the Image in this listing is a stock photo and may not match the covers of the actual item,2300grams, ISBN:0131968939. Seller Inventory # 3346179

Book Description Pearson Education, Limited, 2005. Condition: Good. 11th. Ships from the UK. Shows some signs of wear, and may have some markings on the inside. Seller Inventory # GRP94456781

Shipping: US$ 5.47
From United Kingdom to U.S.A.
Destination, rates & speeds