Items related to The Oxford Dictionary of Music

The Oxford Dictionary of Music 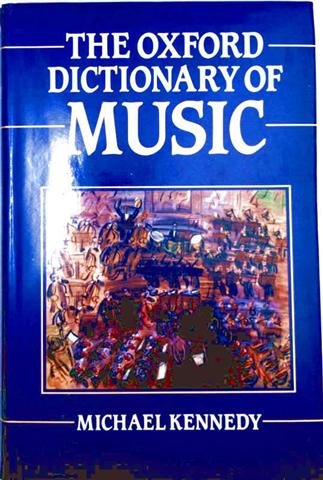 With over 10,000 total entries, The Oxford Dictionary of Music is the most comprehensive, up-to-date, and accessible music reference of its size now available. Here is a wealth of concise informationon music and musicians from the Middle Ages to the present day. Written to appeal to general readers as well as academics and professionals, the book is an indispensable addition to the reference shelf of the concert goer, the opera buff, the record buyer, the radio listener (and television watcher), or anyone involved in music, whether amateur or professional.
From Abbado to Zuckerman, from Abide With Me to Zar und Zimmermann, from Accordion to Zither, the book's easy-to-use, alphabetically arranged entries emcompass musical topics of all kinds: composers, performing artists in all fields, orchestras, titles and descriptions of individual works (including operas and ballets), musical instruments, musical forms and terms, institutions, and writers on music. Its coverage of composers is exceptional, offering up-to-date and accurate lists of principal works with unparalleled nationalities.
The book is a greatly revised and enlarged edition of Michael Kennedy's popular Concise Oxford Dictionary of Music. It adds almost 500 completely new entries and features extensive changes and revisions (including complete rewriting in many cases) of some 150 other entries.
Among the 10,307 A-Z entries in The Oxford deictionary of Music, the reader will find: --Biographies of over 2,000 composers --Extensive, accessible, up-to-date lists of composers' works --Almost 1,800 entries on performers --Over 2,200 definitions of musical terms --Over 550 entries on musical instruments --Abundant cross-references --Attractive, readable two-column format About the Author:
One of England's foremost music authorities, Michael Kennedy has been music critic of the Daily Telegraph of London since 1950 and its northern editor since 1960. He has written books on Elgar, Vaughan Williams, and Britten, as well as on Mahler, Strauss, Barbirolli, and the Halle Orchestra.

IAbout the Author:
Michael Kennedy is one of England's foremost authorities on music. He has been a music critic for over forty years, at present with The Sunday Telegraph of London, and he has written books on Mahler, Strauss, Elgar, Vaughan Williams, and Britten.

Kennedy, a longtime British music critic and author, has updated and expanded his 1985 Oxford Dictionary of Music with more than 1,000 new entries plus revisions (in many cases major) to about four-fifths of the original 11,000 entries. Entries define and identify all facets of music from titles of individual works to performers, orchestras, musical forms, instruments, and composers. Identifications can be as short as one line (moll) or as long as four pages (Mozart). Much mention is made of debuts in various places and of first performances; almost no note is made of personal lives apart from music. Among new entries are those for performers Cecilia Bartoli, Evelyn Glennie, Hakan Hardenberger, and Bryn Terfel; composers Robert Moran, Andrew Toovey, and Ellen Taaffe Zwilich; and conductor Esa-Pekka Salonen. Many composer entries have added compositions, including such operas and musicals as William Bolcom's 1992 McTeague, John Corigliano's Ghosts of Versailles (which also has its own entry), and Andrew Lloyd-Webber's Sunset Boulevard. Death of Klinghoffer and Einstein on the Beach also have their own entries. An update to the entry for Paul McCartney includes his 1991 Liverpool Oratorio. Many 1990s dates of new compositions, debuts, first performances, and deaths are noted, including those of Copland and Bernstein. Entries for Carreras, Domingo, and Pavarotti are all updated, but no mention is made of the "Three Tenors" concert(s). A few people not included: Nadia Salerno-Sonnenberg, Ofra Harnoy, neither Wynton nor Branford Marsalis, nor Ida or Ani Kavafian. The Beaux Arts Trio entry still includes the names Pressler, Cohen, and Greenhouse even though they have left the group; the Juilliard Quartet entry mentions Robert Mann as the sole original member left while not naming others. The first edition of this title received an unequivocal endorsement in RBB stating that it was "indispensable to all types of libraries"; this new edition merits the same recommendation.

The Oxford Dictionary Of Music