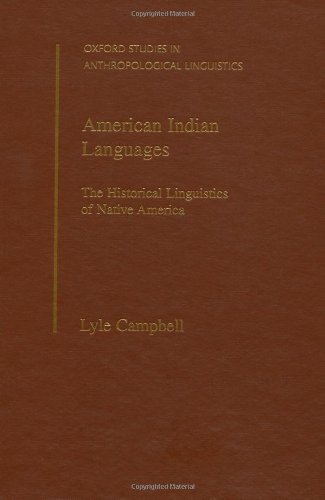 Native American languages are spoken from Siberia to Greenland, and from the Arctic to Tierra del Fuego; they include the southernmost language of the world (Yaghan) and some of the northernmost (Eskimoan). Campbell's project is to take stock of what is currently known about the history of Native American languages and in the process examine the state of American Indian historical linguistics, and the success and failure of its various methodologies.

There is remarkably little consensus in the field, largely due to the 1987 publication of Language in the Americas by Joseph Greenberg. He claimed to trace a historical relation between all American Indian languages of North and South America, implying that most of the Western Hemisphere was settled by a single wave of immigration from Asia. This has caused intense controversy and Campbell, as a leading scholar in the field, intends this volume to be, in part, a response to Greenberg. Finally, Campbell demonstrates that the historical study of Native American languages has always relied on up-to-date methodology and theoretical assumptions and did not, as is often believed, lag behind the European historical linguistic tradition.

Lyle Campbell, Head of Department and Professor of Linguistics, University of Canterbury.

"It's the kind of book I wish had been available when I was a student and would have saved me many long hours and fruitless searches in libraries....It will be used for a long time to come and well after the furor about Greenberg has died down."--Margaret Langdon, University of California, San Diego