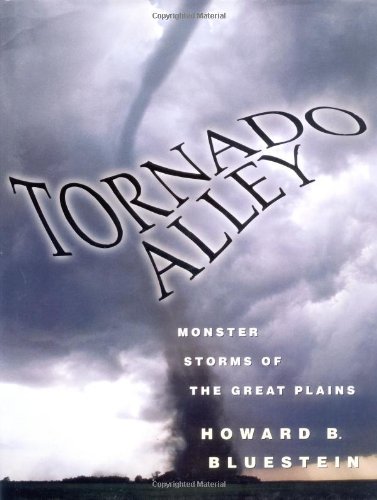 Tornadoes are the most violent, magnificent, and utterly unpredictable storms on earth, reaching estimated wind speeds of 300 mph and leaving swaths of destruction in their wake. In Tornado Alley, Howard Bluestein draws on two decades of experience chasing and photographing tornadoes across the Plains to present a fascinating historical account of the study of tornadoes and the great thunderstorms that spawn them.
A century ago, tornado warnings were so unreliable that they were usually kept under wraps to avoid causing panic over a storm that might or might not materialize. Despite cutting-edge Doppler radar technology and computer simulation, these storms remain remarkably difficult to study. To date, no instrument designed to measure wind speed has ever survived a direct hit by a tornado. Leading scientists still conduct much of their research from the front seat of a speeding van and often contend with jammed cameras, flash floods, flying debris, and windshields smashed by hailstones. Using his own spectacular photographs, Bluestein documents the exhilaration of hair-raising encounters with as many as nine tornadoes in one day, as well as the crushing disappointment of failed expeditions and ruined equipment. Most of all, he recreates the sense of beauty, mystery, and power felt by the scientists who risk their lives to study violent storms.
For scientists, amateur weather enthusiasts, or anyone who's ever been intrigued or terrified by a darkening sky, Tornado Alley provides not only a history of tornado research but a vivid look into the origin and effects of nature's most dramatic phenomena.

Howard Bluestein is Professor of Meteorology at the University of Oklahoma and is frequently a visiting scientist at the National Center for Atmospheric Research in Boulder, Colorado. He is the recipient of numerous awards and grants, and his cloud photographs have appeared worldwide in magazines, books, calendars, and museums. He lives in Norman, Oklahoma and Boulder, Colorado.

"The descriptions of the storms themselves are nothing less than awesome..., An entrancing summary of what is known and conjectured about tornadoes, from a man who has been running after them for over 20 years."--Kirkus Reviews

"Bluestein has succeeded in writing the first serious book on storm chasing. He skillfuly blends tornado theory, observations, and models with his own spectacular photographs into a coherent story of what it's like to `be there' for more than 20 years of storm chases in the Great Plains.
Written in a straightforward, non-technical style, Tornado Alley will capture the interest of readers intrigued with and yes, even terrified of, Planet Earth's most violent weather phenomena."--James F. Kimpel, Director, National Severe Storms Laboratory

"Professor Bluestein has painted a captivating portrait of one of the great wonders of nature, demonstrating that scientific revelation can enhance our sense of awe and beauty. He has done for the tornado what E.O. Wilson did for the ant and Jack London for the wolf."--Kerry Emanuel,
Massachusetts Institute of Technology

"Howie Bluestein is an innovator in tornado research. He has written a book useful to the professional meteorologist but still understandable to the weather hobbyist. His enthusiasm for the subject is obvious--personal reflections make this book a pleasure to read."--Valerie Voss, CNN Senior
Meteorologist

"Tornadoes are the Tyrannosaurs Rex of the atmosphere. Howie Bluestein is one of the world's leading tornado researchers and takes us on an exciting scientific ride to the land of these monsters. He captures the excitement of `the chase' in words and pictures like few authors can. Not only a
chase to see and document nature's most fearsome whirlwinds, but the chase and excitement of science and scientists as they seek to unravel the mysteries of severe thunderstorms and tornadoes. From taking us from the early days of tornado research, to an encounter with an F5 monster, to helping us
better understand how thunderstorms form, to a day when cowboys lassoed an errant instrument, Tornado Alley is a written and visual treat for anyone who has ever been fascinated by the awesome power of nature, and wondered what it would be like to be on the ultimate chase...not only to see but to
understand."--Bob Ryan, meteorologist, WRC-TV, Washington, D.C.

"For anyone who has a passion and respect for severe weather, you will love this book. It's a true F6."--Jim Cantore, meteorologist

"Dozens of the author's own photographs show the mesmerizing power of tornadoes as his text reflects the conversion of an enthusiasm into a profession."--Booklist

"Bluestein masterfully weaves his experiences together with his insights into this constantly evolving field of research."--Roger A. Pielke, Sr Nature

"The photographer/scientist Bluestein included something for everybody: numerous color photographs of tornadoes and convective clouds; diagrams of storm and atmospheric structure; and tales of chasing tornadoes in cars, trucks, and planes equipped with weather instruments and cameras for
documenting storm behavior."--Bulletin of the American Meteorological Society

"Extraordinary images and detailed explanations of atmospheric phenomena paint a true picture of the science behind storm chasing... Tornado Alley now occupies a prominent postion on my bookshelf as it should yours. It is far too beautiful a gem for a coffee table."--Weatherwise