Items related to Satellites of the Outer Planets: Worlds in Their Own...

Rothery, David A. Satellites of the Outer Planets: Worlds in Their Own Right

Satellites of the Outer Planets: Worlds in Their Own Right 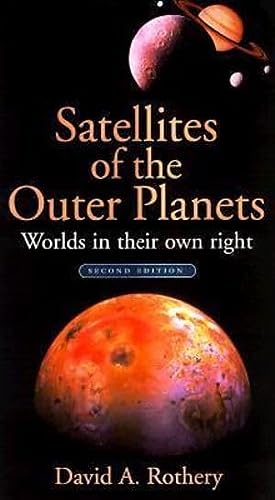 Extensively revised and updated, this new edition of David A. Rothery's acclaimed geological guide to the outer solar system includes results and close-up color and black and white images from both the 1995-1999 Galileo mission to Jupiter and the Voyager space probe. Rothery, a noted planetary scientist, explains the geological aspects of the major satellites of the outer planets, from Jupiter to Neptune and the Pluto-Charon system. In particular he shows how tectonic and volcanic processes, driven by heat from within, have shaped the rigid outer layers of these worlds. Rothery also discusses the similarities and differences among them and the ways in which they resemble Earth-like planets. This fascinating book is written in an introductory style ideal for first- or second-year college courses. Amateur geologists and astronomers will also find its insights rewarding.

David A. Rothery is a volcanologist and planetary scientist. A Senior Lecturer at the Open University, UK, he is well known for his research on volcano monitoring and has written numerous popular magazine articles as well as made appearances on on radio and TV in the UK to explain volcanoes and planetary science.

On the first edition: "Rothery does an excellent job of synthesizing the research inspired by the Voyager missions into a coherent description of outer solar system geology." --Jonathan I. Lunine, Sky & Telescope

"...a highly readable, respectably accurate and complete nontechnical summary of planetary satellites for general and scientific audiences that is not otherwise available. Indeed, this is how I might have wished to write a book on icy satellites should I have done so." --Paul M. Schenk, Icarus
"Rothery brings these satellites to life." --David Hughes, New Scientist
"The depth and authority of the treatment of physical geological processes makes this a good introduction to the outer satellites for undergraduate students, while the clarity of the text ensures that things do not become too complicated for less expert readers." --Lionel Wilson, Times Higher Eduation Supplement
". . .the illustrations are useful, plentiful and well-discussed in the text. The author tells us in chapter one that geologists usually do not pay enough attention to the geology of other worlds. If that is due in part to the lack of a suitable reference book, this highly readable text should help these scientists broaden their perspectives."-- Meteorites and Planetary Science
"[A] comprehensive update on all of the moons in the solar system ... an appropriate starting point ... it treats these satellites of other planets as mini-worlds driven by geology every bit as interesting as encountered on the major planets."--Griffith Observer

1. SATELLITES OF THE OUTER PLANETS:

2. Satellites of the Outer Planets: Worlds in Their Own Right Rothery, David A.

3. SATELLITES OF THE OUTER PLANETS:

4. Satellites of the Outer Planets

5. Satellites of the Outer Planets: Worlds in Their Own Right

Shipping: US$ 45.06
From United Kingdom to U.S.A.
Destination, rates & speeds