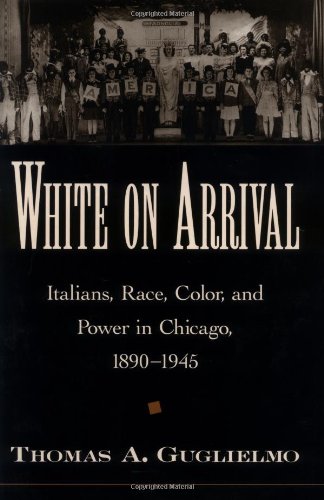 Immigrating to the United States, Italians, like all others arriving on America's shores, were made to fill out a standardized immigration form. In the box for race, they faced two choices: North Italian or South Italian. On the line requesting information on color, they wrote simply "white." By World War II, the only option they had for race and color questions was "white."
This identification is suggestive of the many ways in which Italians became white on arrival in the United States, as Thomas A. Guglielmo demonstrates in this prize-winning book. While many suffered from racial prejudice and discrimination, they were nonetheless viewed as white, with all the privileges this color classification bestowed, in the corridors of American power--from judges to journalists, from organized labor to politicians, from race scientists to realtors.
Taking the mass Italian immigration of the late 19th century as his starting point and drawing on dozens of oral histories and a diverse array of primary sources in English and Italian, Guglielmo focuses on how perceptions of Italians' race and color were shaped in one of America's great centers of immigration and labor, Chicago. His account skillfully weaves together the major events of Chicago immigrant history--the "Chicago Color Riot" of 1919, the rise of Italian organized crime, and the rise of industrial unionism--with national and international events--such as the rise of fascism and the Italian-Ethiopian War of 1935-36--to present the story of how Italians approached, learned, and lived race. By tracking their evolving position in the city's racial hierarchy, Guglielmo reveals the impact of racial classification--both formal and informal--on immigrants' abilities to acquire homes and jobs, start families, and gain opportunities in America.
Carefully drawing the distinction between race and color, Guglielmo argues that whiteness proved Italians' most valuable asset for making it in America. Even so, Italians were reluctant to identify themselves explicitly as white until World War II. By separating examples of discrimination against Italians from the economic and social advantages they accrued from their acceptance as whites, Guglielmo counters the claims of many ethnic Americans that hard work alone enabled their extraordinary success, especially when compared to non-white groups whose upward mobility languished. A compelling story, White on Arrival contains profound implications for our understanding of race and ethnic acculturation in the United States, as well as twentieth-century immigration, urban, and political history.

Thomas A. Guglielmo is an Assistant Professor of American Studies at the University of Notre Dame.

"an important advance in our understanding of the racila dynamics involving early twentieth-century immigrants. A major contribution that deserves to exercise a major influence on the discussion of race in the US."--American Historical Review

"White on Arrival gets here right on time. As we increasingly require histories that speak to the ways race has been made both in the U.S. and beyond its borders, Guglielmo provides a meticulous local study aware of the international flows of migrants and ideas. As we urgently need mature historical accounts providing the historical context for debates over affirmative action and reparations, he carefully and compellingly shows how Italian Americans both felt the brutalities of race and benefitted from the privileges of whiteness."--David Roediger, University of Illinois
"How did the 'New Immigrants' of the early twentieth century become the 'White Ethnics' of the postwar era? In this exhaustively researched study of one immigrant group's encounter with race, Tom Guglielmo provides an unusual perspective on the everyday bases of racial identity, thinking, and behavior. He roots his discussion in the everyday lives of Italian immigrants and their neighbors and in the process illuminates the complex process by which Italians became 'Americans' in the racially-charged atmosphere of early twentieth century Chicago's politics, labor relations, popular culture, and residential life. An outstanding social history, White on Arrival also speaks to cultural and intellectual historians concerned with the idea of race and its implications for the cultural lives of common Americans."--James R. Barrett, University of Illinois at Urbana-Champaign
"Every time I think the 'whiteness studies' paradigm has crashed and burned, another careful innovative, illuminating study comes along to prove me wrong. Thomas Guglielmo's White on Arrival is just such a study. It is a deeply researched, richly textured treatment of both sides of a complicated equation: the ways in which it mattered that 'Italianness' was conceived in biologized, 'racial' terms, and the ways in which it mattered (and continues to matter) that Italian immigrants and their American-born children nonetheless shared a safe haven of legal whiteness with a number of other 'white' groups on the scene."--Matthew Frye Jacobson, Yale University
"In this original, provocative, and theoretically sophisticated study, Thomas Guglielmo offers us the first substantive, in-depth examination of Italian immigrants, racial categorization, and racial identity in early 20th century America. Grounding his arguments and findings in extensive primary research, he successfully refutes many of the premises and conclusions advanced by the 'whiteness school,' providing an alternative and often compelling narrative and methodology for exploring the history of immigration and race."--Eric Arnesen, University of Illinois at Chicago
"During the 1990s, a variety of studies adopted the notion of south, central, and eastern European immigrants as 'in-between people,' who were neither fully black nor white, during their early encounter with industrial America. While such studies illuminated racial formation as a historical process, Professor Guglielmo convincingly argues that such studies often oversimplified the phenomenon. Based upon a broad range of archival sources and oral interviews with Italians in Chicago, Professor Guglielmo carefully documents the white skin privileges that Italians enjoyed from the outset of their sojourn on American soil."--Joe W. Trotter, Carnegie Mellon University