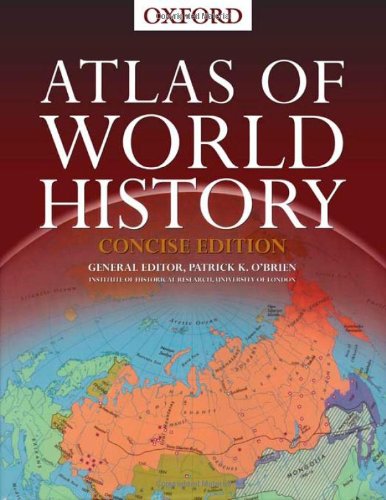 Synthesizing exceptional cartography and impeccable scholarship, the Atlas of World History traces 12,000 years of history with 450 full-color maps and over 200,000 words of text. Its outstanding features include:
* More than 200 illustrations and tables
* Longer essays on worldwide trends, political developments, and military conflicts, highlighting the most significant socioeconomic, cultural, and religious themes for five pivotal historical periods
* Devotion to the rich past of Africa, Asia, and the Americas
* Cross-references and an 8,000-entry index with alternative name forms permitting movement through regions and time periods with the utmost of ease
The Atlas of World History is sure to appeal to a wide audience of history and geography buffs and scholars, as well as students.

Patrick O'Brien, Director of the Institute of Historial Research, University of London.

This useful resource is also dangerously absorbing, allowing readers to pore over charts, maps and short articles on such subjects as the golden age of Athens, the 16th-century expansion of the Mughal Empire through India, the foreign policy of Mao Zedong and the break-up of the Soviet Union. This overview of human history, with 450 maps and 160 illustrations, begins with the emergence of Homo sapiens and culminates with the post-WWII era, moving among various regions of the globe in chronological order. It's divided into sections on ancient, medieval, early modern, Enlightenment and 20th century history, with easy-to-read two-page entries covering such subjects as "Barbarian Invasions of the Roman Empire, 100-500" and "The Development of Australia and New Zealand Since 1790." The section on postwar life includes charts showing migration patterns, female enfranchisement, distribution of wealth across the globe and changes in the environment. O'Brien, a professor at the London School of Economics, has done a fine job editing this concise edition, an excellent gift book for students of history.
Copyright 2002 Reed Business Information, Inc.