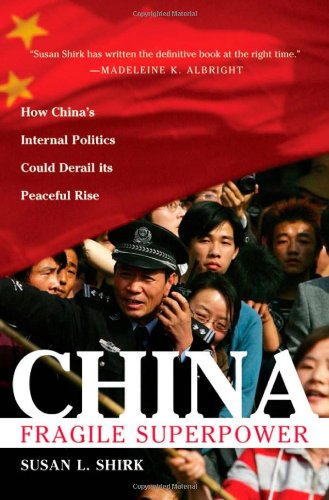 Once a sleeping giant, China today is the world's fastest growing economy--the leading manufacturer of cell phones, laptop computers, and digital cameras--a dramatic turn-around that alarms many Westerners. But in China: The Fragile Superpower, Susan L. Shirk opens up the black box of Chinese politics and finds that the real danger lies elsewhere--not in China's astonishing growth, but in the deep insecurity of its leaders. China's leaders face a troubling paradox: the more developed and prosperous the country becomes, the more insecure and threatened they feel.
Shirk, a former Deputy Assistant Secretary of State responsible for China, knows many of today's Chinese rulers personally and has studied them for three decades. She offers invaluable insight into how they think--and what they fear. In this revealing book, readers see the world through the eyes of men like President Hu Jintao and former President Jiang Zemin. We discover a fragile communist regime desperate to survive in a society turned upside down by miraculous economic growth and a stunning new openness to the greater world. Indeed, ever since the 1989 pro-democracy protests in Tiananmen Square and the fall of communism in the Soviet Union, Chinese leaders have been haunted by the fear that their days in power are numbered. Theirs is a regime afraid of its own citizens, and this fear motivates many of their decisions when dealing with the U.S. and other foreign nations. In particular, the fervent nationalism of the Chinese people, combined with their passionate resentment of Japan and attachment to Taiwan, have made relations with these two regions a minefield. It is here, Shirk concludes, in the tangled interactions between Japan, Taiwan, China, and the United States, that the greatest danger lies.
Shirk argues that rising powers such as China tend to provoke wars in large part because other countries mishandle them. Unless we understand China's brittle internal politics and the fears that motivate its leaders, we face the very real possibility of avoidable conflict with China. This book provides that understanding.

About the Author:
Susan L. Shirk, former Deputy Assistant Secretary of State responsible for U.S. relations with China, is Director of the University of California's Institute on Global Conflict and Cooperation, and she is a professor at UC-San Diego's Graduate School of International Relations and Pacific Studies. A leading authority on China, she has been visiting that country since 1971, meeting with top Chinese officials, and has written numerous books and articles on this subject, including pieces that have appeared in The Washington Post, Financial Times, and Wall Street Journal.
From The Washington Post:
Reviewed by John Pomfret

Susan L. Shirk starts out her revelatory book on China with a nightmare scenario. A Chinese SU-27 fighter and a Taiwanese F-16 collide over the Taiwan Strait. The incident spirals out of control when the Chinese do what they always do in a crisis: blame the other guy. Demonstrations erupt in Beijing. Protesters demand that the Communist Party confront Taiwan and the United States. "When will China finally stand up?" read the signs. Washington scrambles as Beijing readies for war.

This brief, fictional opening frames Shirk's book, dramatizing the possibility that China's communist leadership could lurch into combat with Taiwan and the United States, which is obligated to defend the island nation under the Taiwan Relations Act. She sets out to explain why it is not a mere fantasy and why we, basically, need to be nice to China to keep the nightmare at bay.

At a time when much writing about China frothily presumes the unstoppable rise of a global titan, it is refreshing that a respected academic and former government official (Shirk was the deputy assistant secretary of state for East Asia during the second Clinton administration) questions the notion that China is going to run the world. "China may be an emerging superpower," she writes, "but it is a fragile one."

Inside China, she argues, the party leadership is hemmed in by threats to its stability: a rapidly aging population, the rise of the Internet, privatization of the economy, a widening gap between urban rich and rural poor, a restive population fed up with corruption, pollution that not only sickens but kills, mounting unemployment in an economy that needs to grow 7 percent annually just to provide jobs for 25 million new people entering the workforce. "All around them," Shirk contends, "the leaders see new social forces unleashed by economic reforms that could subvert the regime." Moreover, Shirk describes a regime -- half Mafia, half corporate board -- so obsessed with staying in power that it is ill-equipped to deal with these challenges. In a country where communist ideology is dead and a dog-eat-dog form of capitalism is ascendant, you'd think economic interests would be supreme. That's not the case, Shirk argues. After the crackdown on student-led protests in Tiananmen Square in 1989, the military and security services gained even more power than they already had in a society built on Chairman Mao's maxim that "political power grows out of the barrel of a gun."

The minister of public security is a Politburo member for the first time since the Cultural Revolution, Shirk notes, but only one person with business experience has become an alternate member of the party's Central Committee, a significantly lower rank. The security services have joined with the organizations that handle propaganda and personnel to create what Shirk calls "the control cartel" devoted to pushing the party's new ideology, a virulent form of nationalism.

Force-fed to China's people through programs such as the "Patriotic Education Campaign" (for all college students), nationalism nurtures "popular resentments against Japan and America and an expectation that Taiwan would soon be reunified," Shirk writes. Look at China's reaction to the food, toy and toothpaste scandals created by shoddy products: Instead of acknowledging the concerns of Western consumers, the Chinese Communist Party's propaganda organs have gone into attack mode, branding these worries as a campaign to isolate and weaken China. The problem, Shirk says, is that this form of nationalism has "boxed the CCP and its leaders into a corner." With reactions like these, she asks, "how can they stabilize relations with these important countries on which China's economic growth, and its political stability, depend?"

Shirk's book shines when she shows how this resentful nationalism has hurt China's relations with Japan and the United States. She depicts ties with Washington as prone to troubles, partly because the Chinese government lacks a crisis-management system. Shirk uses two case studies -- the accidental U.S. bombing of China's embassy in Yugoslavia in 1999 and the collision between a U.S. spy plane and a Chinese jet fighter in 2001 -- to show how the Chinese leadership has become hostage to the expectations churned up by the very nationalism it has fomented. She contends that the Ministry of Propaganda and the People's Liberation Army jumped to blame the United States for both crises and presented unrealistic demands that made it difficult for the Chinese government to back down.

So how to deal with this economic giant that exhibits all the maturity of a muscular teenager? Here Shirk's fine book breaks down. She wants the United States to soft pedal China's human rights violations because, she argues, "America's overriding national interest lies in averting a war." In addition, she calls on the U.S. government to stop pressuring Japan to build up its military. And she advises U.S. officials to give China "face" -- or respect -- whenever possible.

I'd counter that, while Shirk is right to be vigilant about preventing a conflict, she exaggerates the threat. To bolster her argument that Chinese nationalism needs our utmost attention, she compares resurgent China with Japan and Germany in the 1930s. Squeeze China too much, she argues, and you'll get World War III. But, historically, China has been a far more fragmented society than either Germany or Japan. Faced with a grave threat to their nation's survival from the Japanese invasion that began in the '30s, what did China's elite do? They barely battled the Japanese and continued their civil war. One Chinese person is a dragon, a Chinese saying goes, but three of us are just an insect.

Shirk has written an important book at an important moment, with the Beijing Olympics approaching and a new Chinese product scandal breaking practically every week. China: Fragile Superpower should change our assessment of China's leadership, which is a lot less stable than many of us thought. But her overriding fear of war skews her view of the Chinese and of how America should deal with them.