Items related to The Church of the Holy Sepulchre in Jerusalem [Schweich... 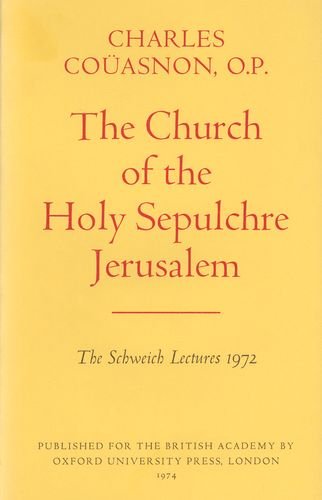 The Church of the Holy Sepulchre in Jerusalem has suffered many vicissitudes. A Constantinian foundation, it was twice destroyed and rebuilt before the Crusaders took it in hand. Respected by Saladin at his conquest, the church remained much as the Crusaders left it, until in 1808, a fire broke out and spread through the whole building. In 1927 a severe earthquake shook Jerusalem causing widespread damage to the structure, so that for forty years afterwards the southern facade was supported by steel scaffolding. No one has probably had such a close knowledge of the church, from foundation to roof top, as Father Couasnon, who, among others, was instrumental in drawing up the restoration plan agreed upon in 1959 by the various churches owning different parts of the complex of buildings. In his "Schweich Lectures" delivered at the British Academy in 1972, Father Couasnon describes the history of the church in detail, revealing the fresh discoveries which have enabled the site to be planned with a new authority.

1. The Church of the Holy Sepulchre Jerusalem (Hardback)

Book Description Condition: NEW. 9780197259382 This listing is a new book, a title currently in-print which we order directly and immediately from the publisher. Print on Demand title, produced to the highest standard, and there would be a delay in dispatch of around 10 working days. For all enquiries, please contact Herb Tandree Philosophy Books directly - customer service is our primary goal. Seller Inventory # HTANDREE01567008

Shipping: US$ 21.12
From United Kingdom to U.S.A.
Destination, rates & speeds

2. The Church of the Holy Sepulchre in Jerusalem [Schweich Lectures of the British Academy - 1972]