Items related to Puccini and The Girl: History and Reception of The...

Randall, Annie J.; Davis, Rosalind Gray Puccini and The Girl: History and Reception of The Girl of the Golden West

Puccini and The Girl: History and Reception of The Girl of the Golden West 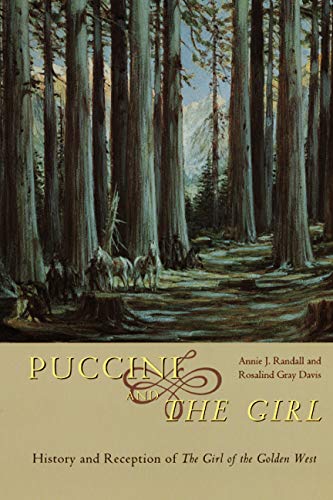 Set in the American West during the California Gold Rush, La fanciulla del West marked a significant departure from Giacomo Puccini's previous and best- known works. Puccini and the Girl is the first book to explore this important but often misunderstood opera that became the earliest work by a major European composer to receive an American premiere when it opened at New York's Metropolitan Opera House in 1910.

Adapted from American playwright David Belasco's Broadway production, The Girl of the Golden West, Fanciulla was Puccini's most consciously modern work, and its Met debut received mixed reviews. Annie J. Randall and Rosalind Gray Davis base their account of its creation on previously unknown letters from Puccini to his main librettist, Carlo Zangarini. They mine musical materials, newspaper accounts, and rare photographs and illustrations to tell the full story of this controversial opera. Puccini and the Girl considers the production and reception of Puccini's "cowboy" opera in the light of contemporary criticism, providing both fascinating insight into its history and a look to the future as its centenary approaches.

Rosalind Gray Davis, a former journalist, is an independent scholar based in Carmel, California.

"Welcome for its spirited defence of this sadly neglected opera." (BBC Music Magazine 2005-04-01)

"A rare and engrossing work of scholarship that can be enjoyed on several levels. For the Puccini-lover, to say nothing of one who has a special interest in La Fanciulla del West, it will provide a wealth of information not previously available, particularly all in one place. Anyone interested in the creative process will find it exposed and examined clearly. The scholar will recognize the fascinating chance discovery, the thrill of the chase and the deep rewards of work undertaken lovingly and with rigorous care by the dedicated and passionate co-authors. . . . what Randall and Davis have produced is an eminently readable, ideally direct and information-packed book that's an absorbing study of a great and increasingly popular masterwork." (Opera Today 2005-04-13)

1. Puccini and The Girl: History and Reception of The Girl of the Golden West

2. Puccini and The Girl: History and Reception of The Girl of the Golden West [Hardcover] Randall, Annie J. and Davis, Rosalind Gray