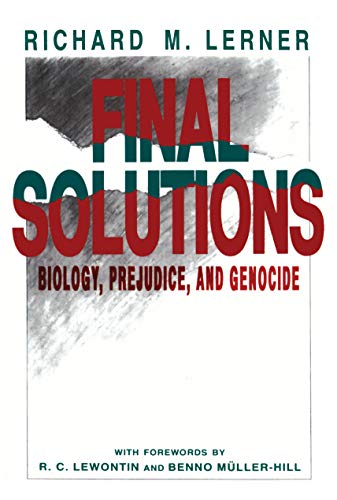 The nature-nurture debate continues to stir controversy in the social and behavioral sciences. How much of human behavior and development can be attributed to biology and how much to the environment? Can either be said to “determine” human development? And what are the implications of each view for society? In this important study, a noted developmental psychologist contributes to this debate by confronting the difficult issue of “doctrines” of human development and the consequences for society of deriving political programs and public policy from them.

Beginning with the premise that scientific ideas are not neutral but can be used for either good or evil, Richard Lerner considers the recent history of one such idea, biological determinism, which at times has had the backing of respected scientists, intellectuals, and political leaders. During this century, biological determinism has been coupled with political philosophies that hold that some people are inherently better than others. This has meant that certain groups of people—Jews, Blacks, Native Americans, women—have been stigmatized because of supposedly innate, even “biological,” differences, with sometimes disastrous consequences. The most notorious instance was Nazi Germany, where “racial science,” given legitimacy by the scientific community, became a cornerstone of the Nazi “Final Solution.”

Meanwhile, theories of biological determinism continue to find adherents within the scientific community. Konrad Lorenz, who was awarded a Nobel Prize in 1973, was a critical figure in the development of the most recent manifestation of biological determinism—sociobiology. Lerner examines the work of Lorenz and current sociobiologists and the implications of their claims for modern society. He fears that biological determinism may again be co-opted to serve the political agenda of today’s reactionary politicians. In fact, Lerner notes, sociobiologists have had to face the fact that organizations such as the fascist National Front party in Britain and its counterparts in France and the United States have selectively seized upon sociobiology to fuel their notions of genetically superior and inferior races.

“In this cogently argued work Richard Lerner scrutinizes deterministic views of human nature and documents the pernicious uses to which they have too often been put. He also presents the scientific rationale for a more flexible view of human potential.”

“Professor Lerner tells a story we need to know and presents a perspective we need to consider.”

“Final Solutions is a book about the extreme horrors that arise when people take seriously the proposition that there are racial and national characters from which we cannot escape. Unlike other books on Nazi race theory, Final Solutions extends ideas of determinism beyond the purely biological into the cultural as well. Cultural determinism—the doctrine that our cultural heritage passed down by a process of unconscious acculturation is inescapable—differs only in a trivial mechanical detail from biological determinism, the doctrine that we cannot escape our genes. Both biological and cultural determinism deny essential freedom to human consciousness.”

—R.C. Lewontin, from the Foreword

In this timely volume, an eminent professor of pediatrics and human development traces the very clear parallels linking Nazi theories of race and heredity--the warped ideology used to justify the Holocaust by those who perpetrated it--to current theories in the field of sociobiology. This is a work long needed, and the author has done a great service in undertaking it. Despite an overly heavy reliance on secondary sources, Lerner succeeds in hammering home two essential truths: that the political implications of research can indeed be independent of the political views of the scientists doing the work and that much science is in fact not independent of such views. Sociobiology lends itself to abuse by racists of all stripes, and this book provides welcome ammunition to those who would challenge them. For academic collections.
- Glenn Petersen, Baruch Coll., CUNY
Copyright 1992 Reed Business Information, Inc.