Items related to Ancient Greece: From Prehistoric to Hellenistic Times 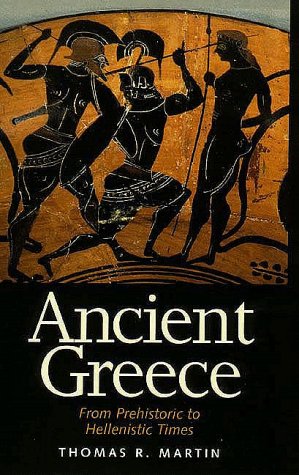 Covers the political, military, and social history of Greece from the Stone Age through the rise of Alexander the Great and the disintegration of his empire after his death

Thomas R. Martin is Jeremiah O'Connor Professor of Classics at the College of the Holy Cross.

A limpidly written, highly accessible, and comprehensive history of Greece and its civilizations from prehistory through the collapse of Alexander the Great's empire. In brisk fashion, Martin (Classics/Holy Cross Coll.) narrates the highlights of what little is known about the Stone Age in Greece, the prehistoric Minoan civilization on the island of Crete, the rise of Mycenean culture, and the Dark Age that looms as a lacuna between approximately 1200 b.c., when Mycenae mysteriously collapsed, and about 750 b.c., when Greece's Archaic Age began. In the Archaic Age, Martin relates, the foundations of life during the classical period were laid: the institution of slavery, which spurred the growth of a leisure class; the emergence of city-states; the establishment of laws; and the development of various types of polity all contributed to both the creative culture and the political tensions that characterized Greece during later eras. Although broadly discussing political, military, and social history, Martin emphasizes the cultural achievements of Athenian civilization during the Golden Age and the impact of the horrendous 27-year Peloponnesian War, which sapped the military strength of Athens and effectively finished the city as a power. Martin also traces the rise of the mercurial Alexander the Great and the rapid creation of his magnificent, far-flung, and ephemeral empire and its disintegration after Alexander's death in 323 b.c. into numerous kingdoms, culturally diverse but all with a Hellenistic flavor. This concise but wide-ranging narrative takes us up to the death of Cleopatra VII, the last Hellenistic monarch of Egypt, in 30 b.c., and the emergence of Rome as the dominant Mediterranean power. A highly readable account of ancient Greece, particularly useful as an introductory or review text for the student or the general reader. -- Copyright ©1996, Kirkus Associates, LP. All rights reserved.

5. British Art Treasures from Russian Imperial Collections in the Hermitage

Shipping: US$ 21.16
From United Kingdom to U.S.A.
Destination, rates & speeds