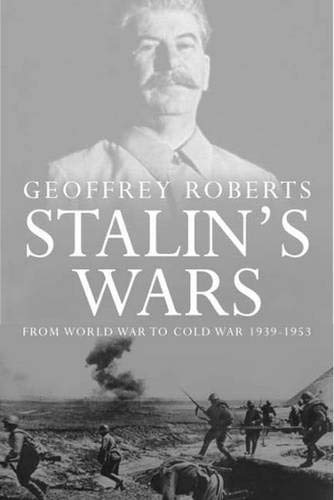 This breakthrough book provides a detailed reconstruction of Stalin’s leadership from the outbreak of the Second World War in 1939 to his death in 1953. Making use of a wealth of new material from Russian archives, Geoffrey Roberts challenges a long list of standard perceptions of Stalin: his qualities as a leader; his relationships with his own generals and with other great world leaders; his foreign policy; and his role in instigating the Cold War. While frankly exploring the full extent of Stalin’s brutalities and their impact on the Soviet people, Roberts also uncovers evidence leading to the stunning conclusion that Stalin was both the greatest military leader of the twentieth century and a remarkable politician who sought to avoid the Cold War and establish a long-term detente with the capitalist world.
By means of an integrated military, political, and diplomatic narrative, the author draws a sustained and compelling personal portrait of the Soviet leader. The resulting picture is fascinating and contradictory, and it will inevitably change the way we understand Stalin and his place in history. Roberts depicts a despot who helped save the world for democracy, a personal charmer who disciplined mercilessly, a utopian ideologue who could be a practical realist, and a warlord who undertook the role of architect of post-war peace.

Geoffrey Roberts is professor of history at the University College Cork, Ireland. He is a frequent contributor to British, Irish and American newspapers and to popular history journals and he has acted as a consultant for a number of TV and radio documentaries. His publications include Victory at Stalingrad (Longman/Pearson, 2002) and The Soviet Union in World Politics (Routledge, 1998).

"'... an astonishing defence of the Soviet dictator... This will provoke lively debate and is a must-read for anyone with an interest in Stalin and his times.' BBC History Magazine 'There have been many books on Stalin in recent years, a few good, some not so bad and the rest pretty poor. This is one of the best, and one of the most useful. Why? Because for the first time we now have a balanced overall account of the great dictator's foreign policy in crucial years.' Paul Dukes, History Today"