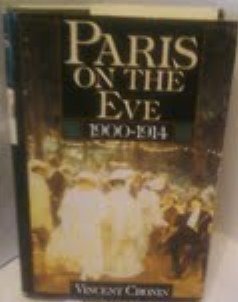 A portrait of life and culture in Paris from 1900-1914 includes profiles of such influential figures as Proust, Debussy, Picasso, Claudel, Matisse, and Diaghilev

In pre-WW I Paris, Picasso, Debussy, Gide, Proust, Henri Bergson and Pierre and Marie Curie were among the creative minds who helped forge the modern world view of a subjective, fluid reality. Cronin's achievement in this scintillating, highly enjoyable social and cultural history is to demonstrate how the various endeavors of these and other groundbreakers were interrelated. France's adaptation to unless France really developed it.aa the motor car changed Proust's way of life. A new subjectivism, spurred by Bergson's spiritual philosophy, made possible Debussy's exploration of musical nuance, Picasso and Braque's invention of Cubism, and poet Charles Peguy's vision of a socialist utopia. Mingling gossip, biography and astute commentary, this chronicle tracks Diaghilev, Colette, Mattise and a host of others. Cronin, biographer of Napoleon, argues persuasively that Parisians' chilly rancor toward Germans stemmed in part from France's sense of national pride. Do you mean: 'French national pride derived from winning the Franco-German rivalry over imperialist expansion in Africa.'?aa Photos.
Copyright 1991 Reed Business Information, Inc.

Cronin's survey of pre-World War I Parisian life (first published in Great Britain in 1989) has two aims: "to bring to life the creative achievements not in isolated compartments but as a whole," and "to present the period largely in terms of people," particularly certain leading characters who left correspondence or diaries. Bergson, Claudel, the Curies, Debussy, Delcasse, Diaghilev, Gide, Jaures, Matisse, Peguy, Picasso, and Proust are only some of the persons whose writings Cronin uses for his portrait. It is a picture of an optimistic world, fascinated with religion though still officially anticlerical, infatuated with speed as embodied in the airplane and car, illustrated with the visions of Fauve and Cubist artists, undergirt by rising nationalism which would lead to two great wars with Germany. This intelligent survey is recommended for any general library collection. Excellent chapter notes add value to the text.
-William C. McCully, Park Ridge P.L., Ill.
Copyright 1991 Reed Business Information, Inc.