Items related to Bono on Bono : Conversations With Michka Assayas 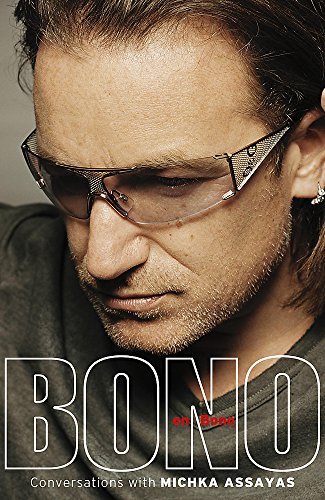 Bono is one of the most influential musicians at work today. Over the past twenty-five years his band, U2, have sold a staggering 130 million albums and collected 14 Grammys. Their success has made Bono one of the most recognisable faces in the world. Here, in a series of conversations with his friend, the music journalist, Michka Assayas, Bono reflects on his transformation from extrovert singer of a small, Irish, post-punk band into an international rock star. Along the way he speaks candidly about his childhood, about his mother's death, about his Christian faith and about his difficult relationship with his father, who died recently. Bono also speaks passionately about how he has used his fame as a platform to campaign fervently on a range of global issues, and why these issues - which include the IRA ceasefire, Third World debt and, most recently, the growing AIDS crisis in Africa - are so important to each of us. Intimate, humorous, and fiercely opinionated, "Bono on Bono" is Bono's story in his own words. It will fascinate and challenge fans of U2 and general readers alike.

Michka Assayas is a music journalist and novelist who lives and works in Paris. Michka met Bono in London in 1980, and was the first journalist to champion U2 outside Ireland and the United Kingdom. Michka and Bono have spent the last two years putting this book together at Bono's home in Dublin, and in Paris, Bologna and on the French Riviera.

U2 vocalist, celebrity activist and one of the world's most outsized rock stars, Bono symbolically takes off his habitual shades to reveal the relatively normal guy behind the flashy (and occasionally bombastic) public persona in this series of wide-ranging conversations. Readers familiar with the Irish singer won't be surprised that he comes off as both earnest and quick minded, but the book's long-form q&a format also reveals an acerbic sense of humor and genuine humility. Topics shift and flow in a fairly nonlinear fashion; anecdotes jump around from 1979 to 1998, from Dublin to Africa, from music to father-son relationships. Presuming that most readers are intimate with U2's history and discography, interviewer Assayas gives little background information other than the dates and location of each discussion. The lack of context or clear chronology is at times frustrating, but Assayas, a French journalist and longtime friend of the group, compensates by steering the conversations into difficult territory: politics, religion and the personal dynamics of a successful rock band. This is sure to appeal to completists; more casual fans may snap it up after seeing one of U2's forthcoming concerts for their album How to Dismantle an Atomic Bomb. Agent, Ed Victor. (Apr. 21)
Copyright © Reed Business Information, a division of Reed Elsevier Inc. All rights reserved.