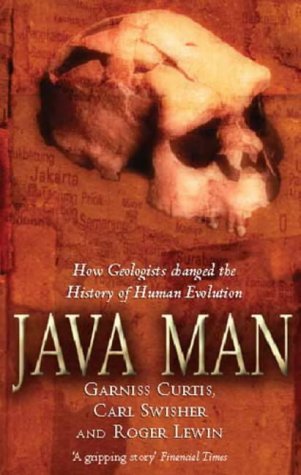 A scientific narrative of a landmark discovery, involving the fascinating adventure of the Dutch physician Eugene Dubois and his search for early humans in Java in the East Indies a century ago. There he uncovered the first fossils of our immediate ancestor, Homo erectus. A century later, the authors brought the power of the most sensitive radiosotopic dating technique to Homo erectus fossils from the same island where Dubois toiled so diligently. Their true age is almost two million years old, a million years older than anthropological theory has held, and the implications are profound. Not only does it mean that Homo erectus left Africa almost a million years earlier than was believed, indicating that it was a very different kind of animal than we thought; it also tells us that our own species, Homo sapiens, evolved rapidly and recently, in Africa. This solves anthropology's most contentious and rancorous debate, that of the origin of modern humans and the fate of the Neanderthals.

If you think nature is red in tooth and claw, you've never seen paleoanthropologists. Never has so much fuss been made by so many over so little actual evidence. Unlike most scientific controversies, however, those in paleoanthropology involve seriously emotional issues: nothing less than the origin and nature of humanity.

One of the most fervent controversies in human origins has been over whether human evolution occurred only in Africa (the "Out of Africa" hypothesis), or whether humans evolved on different continents concurrently (the "Multiregional" hypothesis). The bones known as "Java Man" are key for deciding between these theories, and the most important unknowns about them are their dates. Geochronologists Carl Swisher and Garniss Curtis produced the first good dates for fossil humans from Java and set the paleoanthropological community on its collective ear--some of the fossils are much older than anyone thought, others are much younger. In this book they tell their story with the aid of Roger Lewin, a widely respected science journalist and the author of Bones of Contention.

Historians of academic infighting will find Java Man a treasure trove. Rarely has the mask of science been peeled back so completely, to reveal a seething mass of egos, mistakes, lawsuits, and crude hand gestures, boiling around some real, basic questions in human evolution. It's not yet particularly conclusive, but it is certainly not dull. --Mary Ellen Curtin

"'Garniss, lend me your knife for a second, will you,' I whispered." So begins Java Man, the inside story of how one discovery—a human skull found on the island of Java—by two geologists shook the foundations of science. By uncovering new evidence about the hominid known as Java man, Carl C. Swisher and Garniss H. Curtis were able to date his fossil remains at 1.7 million years, an age that stunned the scientific community because it pushed back the time when humans migrating out of Africa first reached Eurasia by nearly one million years. Cowritten by the popular science writer Roger Lewin, this is a gripping and informative account of the discovery that breathed new life into the human origins debate.

Book Description Abacus, London England, 2002. Soft Cover. Condition: Very Good. 1st Abacus Edition. Paperback. Java Man. Very slight browning to edges of pages. In October 1887 Eugene Dubois' journey to the Dutch East Indies revolutionized conventional thinking about the origins of mankind. In pursuit of the 'missing link' that would prove man was a descendant of the apes, Dubois' discovery of a fossilized skullcap and femur led him to the conclusion of the existence of what became commonly known as 'Java Man' Using advanded dating techniques, Carl Swisher and Garniss Curtis retured to the fossil finds in Indonesia and made an amazing discovery: not only was Homo erectus present far earlier than previously though, the species also existed far more recently, as little as 30,000 years ago. As this book explains, the conclusions of this research are extraordinary: rather than a steady 'sapienization', the evidence suggests that several species coexisted on earth, including Neaderthal man. And for whatever reason - economic competition, violent confrontation - it was Homo sapiens that drove the other sepcies to extinction. Illustrated. 307 pp. (We carry a wide selection of titles in The Arts, Theology, History, Politics, Social and Physical Sciences. academic and scholarly books and Modern First Editions etc.) Size: 8vo - over 7ľ" - 9ľ" Tall Octavo. Paperback. Seller Inventory # 092855

Shipping: US$ 15.59
From United Kingdom to U.S.A.
Destination, rates & speeds

Book Description Paperback. Condition: Very Good. The book has been read, but is in excellent condition. Pages are intact and not marred by notes or highlighting. The spine remains undamaged. Seller Inventory # GOR001116741

Shipping: US$ 10.38
From United Kingdom to U.S.A.
Destination, rates & speeds