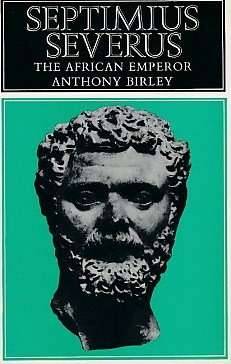 In this, the only biography of Septimius Severus in English, Anthony R. Birley explors how 'Roman' or otherwise this man was and examines his remarkable background and career.
Severus was descended from Phoenician settlers in Tripolitania, and his reign, AD 193-211, represents a key point in Roman history. Birley explores what was African and what was Roman in Septimius' background, given that he came from an African city. He asks whether Septimius was a 'typical cosmopolitan bureaucrat', a 'new Hannibal on the throne of Caesar' or 'principle author of the decline of the Roman Empire'?

"In this excellent book, [Septimius Severus] is rehabilitated as an able if ruthless leader and a remarkable man."
-"The Independent
"A Surprisingly rich picture of the emperor's times."
-Ramsey Macmillan, "Ancient History

Book Description Cambridge University Press, 1971. Condition: Good. 1st. Former Library book. Shows some signs of wear, and may have some markings on the inside. Seller Inventory # GRP79706131

Book Description Eyre and Spottiswoode, 1971. Condition: Good. This is an ex-library book and may have the usual library/used-book markings inside.This book has hardback covers. In good all round condition. No dust jacket. Please note the Image in this listing is a stock photo and may not match the covers of the actual item,850grams, ISBN:0413269000. Seller Inventory # 9052022

Shipping: US$ 11.86
From United Kingdom to U.S.A.
Destination, rates & speeds

Shipping: US$ 12.96
From United Kingdom to U.S.A.
Destination, rates & speeds

Shipping: US$ 34.11
From United Kingdom to U.S.A.
Destination, rates & speeds