Items related to Structure and Dynamics of Membranes: I. From Cells...

Structure and Dynamics of Membranes: I. From Cells to Vesicles / II. Generic and Specific Interactions (Volume 1A) (Handbook of Biological Physics (Volume 1A))

Structure and Dynamics of Membranes: I. From Cells to Vesicles / II. Generic and Specific Interactions (Volume 1A) (Handbook of Biological Physics (Volume 1A)) 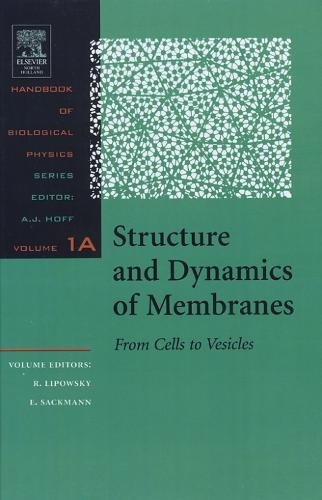 The first volume of the Handbook deals with the amazing world of biomembranes and lipid bilayers. Part A describes all aspects related to the morphology of these membranes, beginning with the complex architecture of biomembranes, continues with a description of the bizarre morphology of lipid bilayers and concludes with technological applications of these membranes. The first two chapters deal with biomembranes, providing an introduction to the membranes of eucaryotes and a description of the evolution of membranes. The following chapters are concerned with different aspects of lipids including the physical properties of model membranes composed of lipid-protein mixtures, lateral
phase separation of lipids and proteins and measurement of lipid-protein bilayer diffusion. Other chapters deal with the flexibility of fluid bilayers, the closure of bilayers into vesicles which attain a large variety of different shapes, and applications of lipid vesicles and liposomes.

Part B covers membrane adhesion, membrane fusion and the interaction of biomembranes with
polymer networks such as the cytoskeleton. The first two chapters of this part discuss the generic interactions of membranes from the conceptual point of view. The following two chapters summarize the experimental work on two different bilayer systems. The next chapter deals with the process of
contact formation, focal bounding and macroscopic contacts between cells. The cytoskeleton within eucaryotic cells consists of a network of relatively stiff filaments of which three different types of filaments have been identified. As explained in the next chapter much has been recently learned about
the interaction of these filaments with the cell membrane. The final two chapters deal with membrane fusion.

... Many of the topics covered here, such as the role of surface tension, the physical basis of the interactions between surfaces and the electrostatic properties of membranes, have not been extensively reviewed elsewhere. ... For those with a more general interest in the properties of membranes, the volume will provide excellent coverage of a less familiar literature.

1. Structure and Dynamics of Membranes: I. From Cells to Vesicles / II. Generic and Specific Interactions (Handbook of Biological Physics) (Vol 1)