Items related to The Pill, Pygmy Chimps, And Degas' Horse: The Remarkable...

Djerassi, Carl The Pill, Pygmy Chimps, And Degas' Horse: The Remarkable Autobiography Of The Award Winning Scientist Who Synthesized The

The Pill, Pygmy Chimps, And Degas' Horse: The Remarkable Autobiography Of The Award Winning Scientist Who Synthesized The 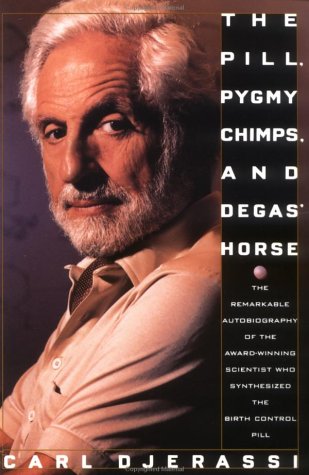 The inventor of the pill and antihistamines describes how he synthesized cortisone and the pill at the age of twenty-eight, and chronicles his career and his metamorphosis into a socially conscious scientist

Best known as the chemist who first synthesized the steroid oral contraceptive popularly called ``the Pill,'' Djerassi (Chemistry/Stanford; the novel Cantor's Dilemma, 1989, etc.), now 68, demonstrates once again that he's no white-coated specialist working in isolation in a lab but a colorful, even eccentric and sometimes self-indulgent man of the world--one who's got chutzpah and a sense of humor and who's deeply concerned with social issues. Indeed, this memoir is a reflection of Djerassi's idiosyncratic personality, offering a mix of serious treatises on chemistry (complete with diagrams of the chemical structure of steroids); lighthearted accounts of his mishaps abroad; thoughtful essays on birth control and world population growth; and revelations of personal tragedies and triumphs. Djerassi has drawn on previously published writings (The Politics of Conception, 1980; various short stories and poems), and many of the chapters can easily stand alone; yet somehow they all hang together, giving a picture of a brilliant, complex man whose world of science transcends geographic and political boundaries. ``Filling the gaps in an autobiography serves no more purpose than filling the holes in Swiss cheese,'' says Djerassi, who has left sizable gaps in his own story. Possibly he had in mind the show-business dictum that one should leave the audience wanting more; that certainly is the result. Any man whose autobiography weaves together stories about pygmy chimps, anti-Semitism, Alfred E. (``What--me worry?'') Neuman, cockroaches and the King of Sweden, death and poetry, and a Degas bronze horse has led a life worth the telling. Happily, Djerassi closes with the promise that he'll continue to write--in a genre he dubs ``science-in- fiction.'' A fascinating if incomplete look at a 20th-century Renaissance man. (Twenty-five photographs--not seen.) -- Copyright ©1992, Kirkus Associates, LP. All rights reserved.

The pill here is the first oral contraceptive, synthesized by the author ( The Politics of Contraception ) at age 28 in 1951; pygmy chimps were the subjects of a mid-career biomedical experiment and Degas's horse represents the delights of art collecting, to which the award-winning scientist turned in later life. Autobiography seems just another vessel for Djerassi's insatiable curiosity and intelligence, revealed elsewhere in forays into fiction ( Cantor's Dilemma ) and poetry ( The Clock Runs Backward ). General readers will enjoy the layered structure bonding such diverse elements as an exotic childhood in Australia and Albania, teenage experiences in the U.S. and nearly 50 years of business and academic success. Those looking for more sustained scientific material, however, may be put off by the anecdotal tone and haphazard blend of encounters in Africa and the Soviet Union, social life at Stanford University, three marriages and Djerassi's daughter's mysterious suicide. Shattering the cliche of scientists as one-dimensional technocrats, the book reveals a singular life with more than its share of pain, self-discovery, danger, wit, joy and irony.
Copyright 1992 Reed Business Information, Inc.

1. The Pill, Pygmy Chimps, And Degas' Horse: The Remarkable Autobiography Of The Award Winning Scientis

2. The Pill, Pygmy Chimps, And Degas' Horse: The Remarkable Autobiography Of The Award Winning Scientist Who Synthesized The Djerassi, Carl

3. The Pill, Pygmy Chimps, And Degas' Horse: The Remarkable Autobiography Of The Award Winning Scientist Who Synthesized The Djerassi, Carl