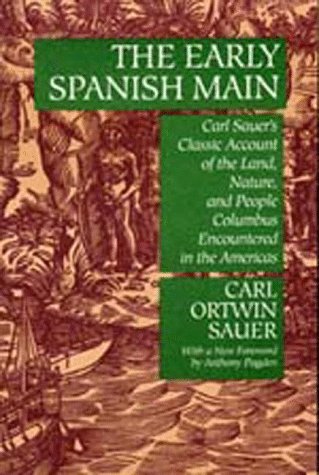 Reissued for the 500th Anniversary of Columbus's Voyage to the Americas, Carl Sauer's Classic Account of the Land, Nature, and People Columbus Encountered

The history of Columbus's four voyages has been told many times. But Sauer's book is still the only work to provide not only a narrative of the voyages and of the colonizing ventures that followed them, but also an exploration of their impact on the peoples, the flora, and the fauna of the Americas.

For Sauer, Columbus was simply "a Genoese of humble birth and small schooling," obstinate and increasingly paranoid. His obsession with gold and the rights he had secured brought the first Spanish venture overseas to the edge of failure. His successors were more competent administrators but continued the quest for riches, destroying the native ecology and the lifestyle of the indigenous peoples. Sauer attempts to show that native Americans had a balanced and highly productive livelihood that gave them abundance, leisure, and satisfaction. This book offers a unique view of the "cultural landscape" Columbus encountered and how it was transformed by the Europeans, establishing a pattern of conquest and settlement that was repeated all over Spanish America.

What happened from 1942 to 1519, when Columbus and the Spaniards were staking out an American Empire? Carl O. Sauer uses contemporary sources and his authoritative knowledge of land forms, vegetation and ethnography in Latin America to place the history of the early Spanish Main in a fresh context.

Carl Ortwin Sauer (1889-1975), until his death, taught at the University of California, Berkeley, where he trained an entire generation of geographers and founded the Berkeley school of cultural geography. Anthony Pagden is a fellow of King's College, Cambridge University.