Items related to The Language War 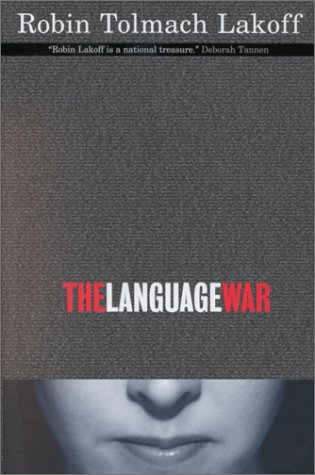 Robin Lakoff gets to the heart of one of the most fascinating and pressing issues in American society today: who holds power and how they use it, keep it, or lose it. In a brilliant and vastly entertaining discussion of news events that have occupied an enormous amount of media space--political correctness, the Anita Hill/Clarence Thomas hearings, Hillary Rodham Clinton as First Lady, O. J. Simpson's murder trial, the Ebonics controversy, and the Clinton sex scandal--Lakoff shows that the struggle for power and status at the end of the century is being played out as a war over language. Controlling language is a basis for all power, she says, and therefore it is worth fighting for. As a result, newly emergent groups, especially blacks and women, are contending with middle- to upper-class white men for a share in "language rights."

Lakoff's introduction to linguistic theories and the philosophy of language lays the groundwork for an exploration of news stories that meet what she calls the UAT (Undue Attention Test). As the stories became the subject of talk-show debates, late-night comedy routines, Web sites, and magazine articles, they were embroidered with additional meanings, depending on who was telling the story. Race, gender, or both are at the heart of these stories, and each one is about the right to construct meanings from languagein short, to possess power. Because language tells us how we are connected to one another, who has power and who does not, the stories reflect the language war.

We use language to analyze what we call "reality," the author argues, but we mistrust how language is used today--witness the "politics of personal destruction" following the Clinton impeachment. Yet Lakoff sees in the struggle over language a positive goal: equality in the creation of our national discourse. Her writing is accessible and witty, and her excerpts from the media are used to great effect.

"Robin Lakoff is a national treasure. She is one of the most astute and knowledgeable linguists in the country (indeed, in the world), and one of the few who turns her analytic eye to the role of language in popular and political culture. It was she who pioneered the field of gender and language. She is poised to be recognized among the general reading public as she has long been recognized in the field of linguistics."—Deborah Tannen, author of You Just Don't Understand and The Argument Culture

"An excellent book. Robin Lakoff shows that if we do not understand how language is put to work in our world, we cannot understand our world, nor live in it effectively."—John Fiske, author of Media Matters

Robin Lakoff is Professor of Linguistics at the University of California, Berkeley, and the author of Talking Power: The Politics of Language in Our Lives (1990), Face Value: The Politics of Beauty (1984), and Language and Woman's Place (1975).