Items related to Byron and Romanticism (Cambridge Studies in Romanticism,... 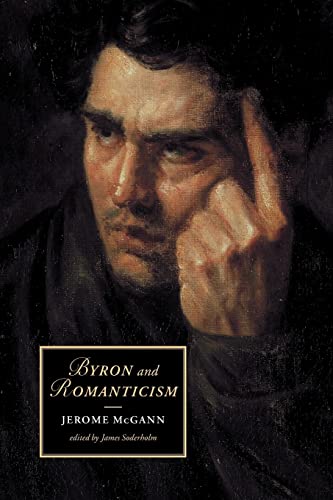 This collection of essays represents twenty-five years of work by a leading critic of Romanticism in general and Byron in particular. It demonstrates McGann's evolution as a scholar, editor, critic, theorist, and historian, and his engagement with the main schools of literary criticism since the advent of structuralism in the 1960s. Many of these essays have previously been available only in specialist scholarly journals. Now for the first time McGann's important and influential work on Byron can be appreciated by new generations of students and scholars.

Jerome J. McGann is the John Stewart Bryan University Professor, University of Virginia, and the Thomas Holloway Professor of Victorian Media and Culture, Royal Holloway, University of London. He is the author of Byron, Fiery Dust (1962) and Don Juan In Context (1972) and the editor of The Complete Poetical Works of Lord Byron (1980-1993).

James Soderholm is Fulbright Scholar and Associate Professor of English and American Literature at Charles University in Prague. He is the author of Fantasy, Forgery, and the Byron Legend (1996) and Beauty and the Critic: Aesthetics in an Age of Cultural Studies (1997).

"...represents a quarter-century of important scholarly work on the subtle ironies of Byron's poetry and of the Byzantine connections between that poetry and Byron's complicated life...a smart book." Richmond Times-Dispatch

"A smart book...a stride in the right direction toward a reform that the serious study of literature urgently needs..." Richmond Times-Dispatch

Book Description Paperback. Condition: New. Language: English. Brand new Book. This 2002 collection of essays represents twenty-five years of work by one of the most important critics of Romanticism and Byron studies, Jerome McGann. The collection demonstrates McGann's evolution as a scholar, editor, critic, theorist, and historian. His 'General Analytic and Historical Introduction' to the collection presents a meditation on the history of his own research on Byron, in particular how scholarly editing interacted with the theoretical innovations in literary criticism over the last quarter of the twentieth century. McGann's receptiveness to dialogic forms of criticism is also illustrated in this collection, which contains an interview and concludes with a dialogue between McGann and the editor. Many of these essays have previously been available only in specialist scholarly journals. Now McGann's influential work on Byron can be appreciated more widely by new generations of students and scholars. Seller Inventory # AAV9780521007221