Items related to Illegal Beings: Human Clones and the Law 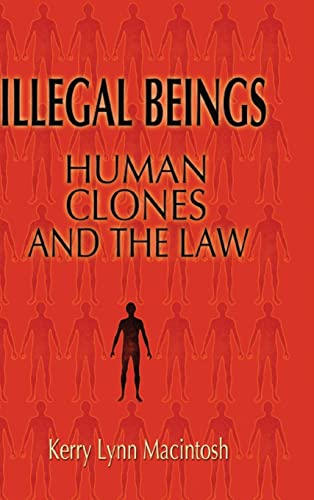 Many people think human reproductive cloning should be a crime-some states have even outlawed it and Congress is working to enact a national ban. However, if reproductive cloning soon becomes a reality, it will be impossible to prevent infertile couples and others from choosing the technology, even if they have to break the law. While most books on cloning cover the advantages and disadvantages of cloning technology, Illegal Beings describes the pros and cons of laws against human reproductive cloning. Kerry Lynn Macintosh, an attorney with expertise in the area of law and technology, argues that the most common objections to cloning are false or exaggerated, inspiring laws that stigmatize human clones as subhuman and unworthy of existence. She applies the same reasoning that was used to invalidate racial segregation to show how anti-cloning laws, by reinforcing negative stereotypes, deprive human clones of their equal protection rights under the law. Her book creates a new topic within constitutional law: existential segregation, or the practice of discriminating by preventing the existence of a disfavored group or class. This comprehensive and novel work looks at how anti-cloning laws will hurt human clones in a fresh perspective on this controversial subject. Kerry Lynn Macintosh is a member of the Law and Technology faculty at Santa Clara University School of Law. She is the author of papers, articles, and book chapters on the law and technology and has contributed to the Harvard Journal of Law and Technology, Boston University Journal of Science and Technology Law, and Berkeley Technology Law Journal.

Kerry Lynn Macintosh is a member of the law and technology faculty at Santa Clara University School of Law. She received her B.A. from Pomona College and her J.D. from Stanford Law School, where she was elected to the Order of the Coif. She has published papers and articles in the field of law and technology in journals such as Harvard Journal of Law & Technology, Boston University Journal of Science, and Berkeley Technology Law Journal.

"Professor Kerry Macintosh's book is an intellectual tour de force that demolishes all the staid arguments against illegal cloning. Everyone should read this book; it is destined to be a classic." Gregory E. Pence, author, Who's Afraid of Human Cloning, Professor, School of Medicine and Department of Philosophy, University of Alabama at Birmingham

"In Illegal Beings, Kerry Macintosh offers a thought-provoking and ultimately persuasive case that there are serious constitutional doubts associated with banning human reproductive cloning. Her ultimate thesis-- that it is wrong to ban an entire class of human beings based on widely-held but unfounded fears associated with their potential existence-- should resonate powerfully with any American desirous of preserving an egalitarian society." Elizabeth Foley, Florida International University College of Law

"The most valuable contribution of Professor Macintosh's Illegal Beings may lie less in what it has to say about human cloning as such than in its exploration of the distinctive harms that laws restricting reproductive liberty can visit upon those whose very existence such laws seek to prevent -- not upon the parents whose freedom those laws constrain but upon the children whose being those laws condemn. Hers is a thought-provoking contribution to a constitutional conversation that is just beginning." Laurence H. Tribe, Harvard University

"Kerry Lynn Macintosh's new book is a thought-provoking contribution to a fascinating conversation about one of the most fundamental institutions in our society, and the ways in which technology shapes it and allows us to re-envision and re-imagine it." - The Law and Politics Book Review Zvi H. Triger, The College of Management, School of Law

Book Description CAMBRIDGE UNIVERSITY PRESS, United Kingdom, 2005. Hardback. Condition: New. Language: English. Brand new Book. Many people think human reproductive cloning should be a crime. In America some states have already outlawed cloning and Congress is working to enact a national ban. Meanwhile, scientific research continues, both in America and abroad and soon reproductive cloning may become possible. If that happens, cloning cannot be stopped. Infertile couples and others will choose to have babies through cloning, even if they have to break the law. This book explains that the most common objections to cloning are false or exaggerated. The objections reflect and inspire unjustified stereotypes about human clones and anti-cloning laws reinforce these stereotypes and stigmatize human clones as subhuman and unworthy of existence. This injures not only human clones, but also the egalitarianism upon which our society is based. Applying the same reasoning used to invalidate racial segregation, this book argues that anti-cloning laws violate the equal protection guarantee and are unconstitutional. Seller Inventory # AAA9780521853286

Book Description Hardcover. Condition: New. 1st. Hardcover. Many people think human reproductive cloning should be a crime. In America some states have already outlawed cloning and Congress is working to enact a national ban. Meanwhile, scientific .Shipping may be from multiple locations in the US or from the UK, depending on stock availability. 272 pages. 0.585. Seller Inventory # 9780521853286

Shipping: US$ 18.76
From United Kingdom to U.S.A.
Destination, rates & speeds