Items related to Maestro: Greenspans Fed And The American Boom 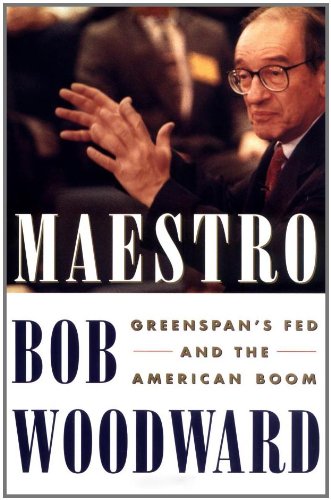 In eight Tuesdays each year, Federal Reserve chairman Alan Greenspan convenes a small committee to set the short-term interest rate that can move through the American and world economies like an electric jolt. As much as any, the committee's actions determine the economic well-being of every American. The availability of money for business or consumer loans, mortgages, job creation and overall national economic growth flows from those decisions. Perhaps the last Washington secret is how the Federal Reserve and its enigmatic chairman, Alan Greenspan, operate. In Maestro, Bob Woodward takes you inside the Fed and Greenspan's thinking. We listen to the Fed's internal debates as the American economy is pushed into a historic 10-year expansion while the world economy lurches from financial crisis to financial crisis. Greenspan plays a sometimes subtle, sometimes blunt behind-the-scenes role. He appears in Maestro up close as never before -- alternately nervous and calm, plunging into mathematics one moment and politics the next, skeptical, dispassionate, always struggling -- often alone.

Maestro traces a fascinating intellectual journey as Greenspan, an old-school anti-inflation hawk of the traditional economy, is among the first to realize the potential in the modern, high-productivity new economy -- the foundation of the current American boom. Woodward's account of the Greenspan years is a remarkable portrait of a man who has become the symbol of American economic preeminence.

Bob Woodward called his biography of Federal Reserve chairman Alan Greenspan Maestro for two reasons. First, Greenspan is a musician. He started out as a Julliard-trained jazz sax man. "He wasn't a good improviser," Woodward reports. And while the other guys got stoned all night, Greenspan "read economics and business books and eventually became the band's bookkeeper." He also cultivated powerful pals, like Ayn Rand, whose coterie dubbed the dour young man "The Undertaker."

More profoundly, Greenspan is a maestro, a conductor, exquisitely attuned to every instrument in the political and economic orchestra. He rules by consensus, but with a firm hand and notoriously inscrutable words. Marvelously, Woodward relates that Greenspan had to propose twice to his wife, the violinist-turned-TV news star Andrea Mitchell, before she understood: "His verbal obscurity and caution were so ingrained that Mitchell didn't even know that he had asked her to marry him." Woodward gives us the inside story of what Greenspan really thinks and how he outmaneuvered the most ruthless politicians on earth in some of the hairiest times imaginable, from the 1987 stock market crash to the 1994-95 Mexican crisis to the stomach-churning turn of the century. It turns out that for all his awesome knowledge of monetary minutiae, the Fed chief literally relies on "a pain in the pit of my stomach" to make decisions. "At times, he found his body sensed danger before his head," writes Woodward. The Fed chief also adapts Einstein's technique to economics, hunting for discrepancies as keys to deeper theories. Einstein made breakthroughs out of bent light; Greenspan deduced productivity gains that government statisticians had overlooked for years. (The gains appeared when Greenspan made the statisticians calculate productivity by business sector, the way it's done in the real world.)

Woodward's prose is cool and rational, not exuberant. But if you're into economics and politics, you'll find a rich gossip trove here. Who knew Reagan had a draft of a presidential order to shut down Wall Street trading at hand in 1987? Scary! Reading Maestro is better than sitting with Greenspan in his famous tub as he charts your future--it's like being right there inside his head. --Tim Appelo

Bob Woodward, an assistant managing editor of The Washington Post, has been a newspaper reporter and editor for 30 years. He has authored or coauthored eight number one national nonfiction bestsellers.