Items related to Into the Blue

Horwitz, Tony Into the Blue 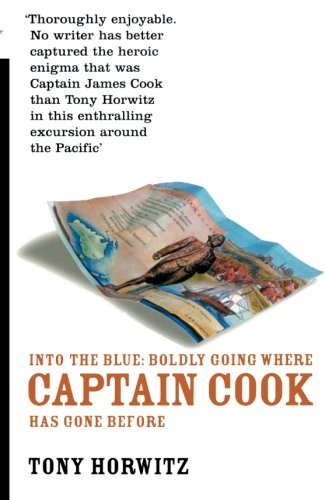 Captain James Cook's three epic journeys between 1768 and 1779 were the last great voyages of discovery. Sailing some 170,000 miles, Cook's ships reached every continent and every ocean, from the Arctic to the Antarctic, from Kamchatka to Java to Easter Island to the coast of Oregon. Before Cook set off, one third of the world's map remained, simply, blank. By the time he was done, there was little left to discover. Cook and his men were also among the first Europeans to encounter Pacific natives: hip-throbbing Tahitian dancers, New Zealand cannibals, Hawaiian surfers, Australian Aborigines sealed off from the rest of the world for thousands of years. With great wit and insight, Tony Horwitz vividly recounts these adventures, and revisits the lands and peoples Cook discovered to explore the captain's legacy in today's Pacific. In the course of his explorations, Horwitz also has exotic and often comic adventures of his own - on land and at sea - including a stint as a working sailor aboard a replica of Cook's tall ship, the Endeavour.

Tony Horwitz, winner of the 1995 Pulitzer Prize for national reporting, is the best-selling author of CONFEDERATES IN THE ATTIC, BAGHDAD WITHOUT A MAP and ONE FOR THE ROAD. He has been a foreign correspondent for the Wall Street Journal and a staff writer for the NEW YORKER, and contributed to HARPER'S, THE NEW YORK TIMES and other publications. He lives with his wife and son in Virginia.

'Playful but never flippant, meticulously researched and occasionally moving, this is an unusual take on the legacy of an enigmatic captain ... it remains a fresh and likeable attempt to boldly go where few biographers have gone before' Daily Telegraph

Into the Blue: Boldly Going Where Captain Cook Has Gone Before by.

Into the Blue: Boldly Going Where Captain Cook Has Gone Before

Into The Blue: Boldly Going Where Captain Cook Has Gone Before

Shipping: US$ 12.10
From United Kingdom to U.S.A.
Destination, rates & speeds

Into the Blue Boldly Going Where Captain Cook Has Gone Before