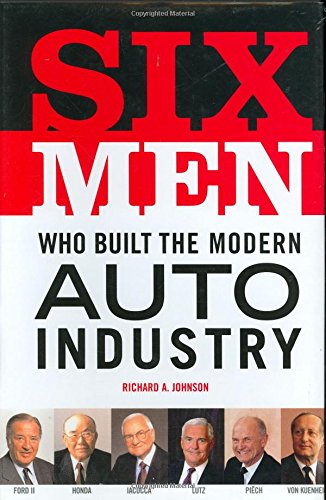 This is the story of six extraordinary men who each built something from nothing, redefined the automotive industry after World War II, and redirected its course for the future: Henry Ford II (visionary autocrat with an iron will), Shoichiro Honda (most successful automotive entrepreneur since Henry Ford I), Eberhard von Kuenheim (founder of the modern BMW), Lee Iacocca, Ferdinand Piech (builder of Volkswagen Group) and Robert Lutz (who left retirement at 70 and is still highly influential at General Motors). What made them special was the sheer volume of fundamental change they brought to the largest industry in the history of the world. They not only re-shaped the auto business, the six made a sizable dent in the societies they lived in. To a man they were great cognitive thinkers. Their minds worked with animal speed, even instinct speed. But more than anything these were brave and cantankerous souls who rode the waves of history. Each could see the future. They could just make it out-sometimes imperfectly, but could see it nonetheless. They took a business that had begun to mature and decline by the 1930s and found ways to make it fresh and whole again.- The compelling story of the global car business over the past half-century.- A lively and engaging narrative that recounts some times collaborative, sometimes archly antagonistic interactions among the men- Full of business revelations at the highest level, written by a journalist operating at the heart of the industry- Global appeal that shows how automotive groups in the USA, Europe and Asia have influenced each other- A business story interlaced with personal details that explains why the six were determined to be successfulAbout the AuthorFor two decades, Richard Johnson has worked for Crain Communications, publisher of the world's leading automotive business publications. Founding editor of Crain's Automotive News Europe, he has been a reporter and editor for the group in Detroit, Tokyo, Frankfurt and London. He is currently a senior editor with Automotive News in Detroit and regularly talks to the most senior executives in the leading car manufacturing groups.