Items related to Movies at Home: How Hollywood Came to Television

Segrave, Kerry Movies at Home: How Hollywood Came to Television

Movies at Home: How Hollywood Came to Television 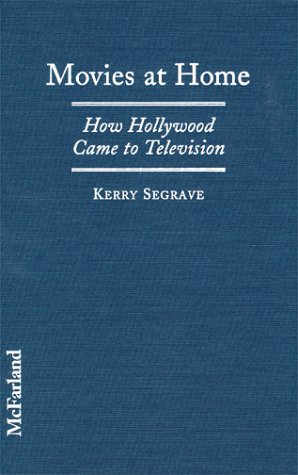 The relationship of Hollywood and television, initially turbulent, has ultimately been profitable from the first sally in what was expected to be a war of attrition, up through the soliciting of movies by major networks, independent stations, basic cable networks, premium cable channels, pay-per-view systems and even the corner video store. When their initial efforts to acquire ownership interests in television outlets were thwarted, Hollywood's major movie studios determined to withhold from the tube not only their films but also their actors, no doubt in hopes of making the rival medium appear a weak substitute for cinema. With ticket sales shrinking and television set purchases booming, the studios, erasing their last contemptuously drawn line in the sand, grudgingly released their films to television-and made a fortune.

Veteran entertainment-media researcher Kerry Segrave is also the author of such works as American Television Abroad (1998), American Films Abroad (1997), Payola in the Music Industry (1994) and Drive-In Theaters (1992). He lives in Vancouver, British Columbia.

Movies at Home. How Hollywood Came to Television

Book Description Condition: New. 263 pp., hardcover, BRAND NEW!! - If you are reading this, this item is actually (physically) in our stock and ready for shipment once ordered. We are not bookjackers. Buyer is responsible for any additional duties, taxes, or fees required by recipient's country. Seller Inventory # ZB989835