Items related to Bad Attitude(s) on Trial: Pornography, Feminism, and...

Bad Attitude(s) on Trial: Pornography, Feminism, and the Butler Decision 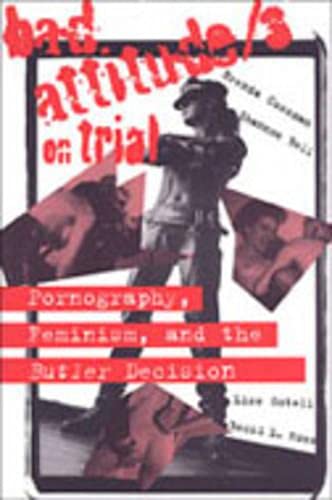 Bad Attitude(s) on Trial is a critical analysis of pornography in the context of contemporary Canada. The notion that pornography both reflects sexual domination and 'victimizes' women has recently found expression in law in the landmark Canadian Supreme Court decision of R. v. Butler (1992). Many feminists embrace this new law as progressive, but in the post-Butler years, straight, mainstream pornography is still flourishing, while sexual representations that challenge conventional notions of sexuality, such as those centering on gay and lesbian sex and s/m sex, are the focus of censorship. It is the censorship of sexual others that the authors critique from a legal, cultural, gay, and philosophical standpoint.

Lise Gotell examines the intervention of the Women's Legal Education and Action Fund (LEAF) in the Butler decision and provides an overview of socio-legal debates on pornography and censorship. Brenda Cossman examines the Butler decision itself and challenges the dominant reading of this case as a feminist victory. Becki Ross critically examines the expert testimony she delivered in defense of Bad Attitude, an American lesbian sex magazine seized by police from Glad Day Bookshop in Toronto in 1992. She details the difficulties she encountered in explicating and contextualizing the specificities, nuances, and complexities of lesbian s/m fantasy in a court of law. In the final chapter, Shannon Bell advances a conception of pornography that is not distinguishable from philosophy, using philosophy to make pornography.

Bad Attitude(s) on Trial provides a new debate on pornography and feminism. It will be of particular interest to students of both women's, and gay and lesbian issues, but will also be relevant for scholars of law, political science, and philosophy, as well as for anyone interested in a different, provocative view of the Butler decision.

'The most daring aspect of Bad Attitude/s on Trial is the authors' attempt to sketch out a positive theory of sexuality to counter the essential negative view enshrined in the common law traditions shared by Canada and the United States.'

'Many observers, especially feminists, have welcomed the Canadian Supreme Court's "Butler" decision that sexual explicitness was not, in itself, obscene. This book shows, however, that in the absence of a test for explicitness, "deviance" has become the new scapegoat and minority sexualities have come under increasing censorship. What seemed a liberalization of the law has turned into the occasion for the control of "bad attitudes." American feminists need to read this book to learn the perils of an ever-encroaching scapegoating of sexual differences. This could happen here!'

'Bad Attitude/s is a superb book. It challenges us all to examine our prejudice about what pornography is. A provocation in the best sense of the word.'

'Bad Attitude/s pierces through the thick veil of hypocrisy surrounding the pornography debates in a lively and well-documented examination of the clashes between bodies and state power, detailing the vicissitudes of the pornography issue in a specifically national context. Rethinking the intersections of sexuality and nation via pornography, it should prove alluring to scholars, fans, ambivalent partisans and outraged citizens alike.'

Shannon Bell is an associate professor in the Department of Political Science at York University.

Brenda Cossman is Professor of Law at the University of Toronto, and taught at the Osgoode Hall Law School from 1988 to 1999.

Becki L. Ross is an associate professor in the Department of Sociology and the Chair of the Women's and Gender Studies Program at the University of British Columbia.

1. Bad Attitude/s on Trial: Pornography, Feminism, and the Butler Decision