Items related to Women Filmmakers of the African & Asian Diaspora:... 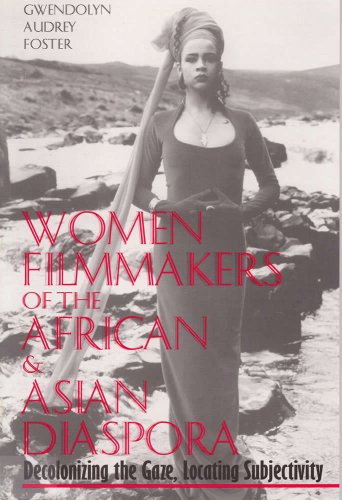 Black women filmmakers not only deserve an audience, Gwendolyn Audrey Foster asserts, but it is also imperative that their voices be heard as they struggle against Hollywood’s constructions of spectatorship, ownership, and the creative and distribution aspects of filmmaking.

Gwendolyn Audrey Foster is Willa Cather Endowed Professor of English and FilmStudies at the University of Nebraska. She is author of numerous books in film studies and cultural studies.

"Anyone who has met the glare of racism, sexism, or homophobia will appreciate Foster's Women Filmmakers of the African and Asian Diaspora. Foster assumes her stance against the marginalization of African and Asian women filmmakers with the precision of a critic seeking to focus the cinema's interdisciplinary vision.

Foster has written a superb study, well researched and documented, but also set free in womanist subjectivities that linger like the images of a great movie." ---Paul Matthew St. Pierre, Simon Fraser University


"Foster's book is organized as a survey of the careers of six women directors--Zeinabu irene Davis, Ngozi Onwurah, Julie Dash, Pratibha Parmar, Trinh T. Minh-ha, and Mira Nair. While the women differ in their cultural identities and in their approaches to filmmaking, Foster sees nonetheless a connection between them in terms of the similar processes of the revision and reconceptualization that characterize their work. Most importantly, these directors are united in their pursuit, as the subtitle of the book has it, of a 'decolonization of the gaze.' " --- Judith Mayne, Ohio State University

"Systematic and meticulous...assuming the 'subject-position of the listener' rather than the 'dominant position of gazer/critic,' Foster records the activism of black women filmmakers who 'intervene' into the 'white hegemonic Hollywood constructions of spetatorship, ownership, and the creative and distribution aspects of filmmaking." -- SIGNS

Gwendolyn Audrey Foster's Women Filmmakers of the African and Asian Diaspora is a welcome contribution to the literatures of black and Third World cinemas -- which have tended to privilege the work of male directors--as well as to feminist scholarship, which has only recently begun incorporating the work of women of color. Her earlier book, Women Film Directors: An International Bio-Critical Dictionary is a useful reference for anyone interested in women's cinema, particularly because of its international scope. In Women Filmmakers of the African and Asian Diaspora, Foster provides detailed analysis of selected films by six women directors of African and Asian descent, who live primarily in the U.S. or U.K. Julie Dash, Zeinabu Irene Davis, Mira Nair, Ngozi Onwurah, Pratibha Parmar, and Trinh T Minh-ha. Foster aims to identify and analyze the strategies utilized by selected black and Asian diaspora women filmmakers to "decolonize the gaze and ground their films in subjectivity," whether such strategies involve constructing an oppositional gaze or excavating buried histories, interrogating constructions of rare, celebrating hybridity, or confronting racism, sexism and homophobia... Highly useful and intelligent." --Women's Studies in Communications.