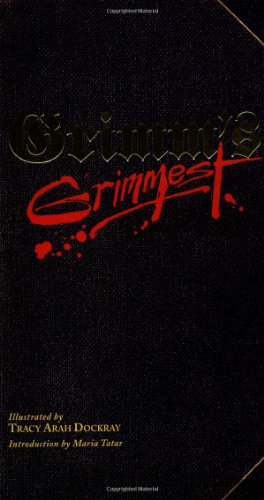 Murder, kidnapping, cruel punishment, and violent revenge -- these are not the bedtime stories mummy used to read. Grimm's Grimmest presents nineteen of the original, unsanitized, unholy tales as they were first collected by the Brothers Grimm -- all fiendishly illustrated in full color. Grimm's Grimmest has the irresistible look and feel of a creaky old leatherbound volume, perhaps discovered in a forgotten trunk or dusty attic. With aged paper and a leathery stamped case, this delightfully shocking collection harkens back to a time when travelers risked roasting or worse and bad manners could yield frightful consequences. From the true horror of Aschenputtel (the original Cinderella story) to Rapunzel's dark secret, here are the authentic stories born long ago in the land of the Black Forest, at a time when fairy tales were not necessarily for children.

Review:
A scholar of fairy tales, Maria Tatar, provides a fascinating introduction about the history and meaning of the stories assembled by the Brothers Grimm. She writes, for example, "We now know that the stories collected in the nineteenth-century folktale anthologies ...had their origins in an irreverent peasant culture that arose in conscious opposition to the feudal state's ruling class. By overdoing it in the realm of storytelling, these narrators were able to alleviate--if only temporarily--some of the tedium that marked the daily life of their audience ... [These tales] can be seen as the ancestors of our urban legends about vanishing hitchhikers and cats accidentally caught in the dryer or as the preliterate equivalents of tabloid tales describing headless bodies found in topless bars. But in many ways, it is the horror film to which the matter and manner of these folktales has most conspicuously migrated. Like horror films, folktales trade in the sensational--breaking taboos and enacting the forbidden with uninhibited energy."

The text of the 19 tales in this collection is based on the 1822 edition of Kinder- und Hausmärchen (Nursery and Household Tales) by Jacob and Wilhelm Grimm--before the tales were expurgated and rewritten to make them more "suitable" for children. It's bound in a handsome faux-antique format, and lavishly illustrated by Tracy Arah Dockray (15 full-page color paintings, and a black-and-white drawing on nearly every page). Most of the tales will be unfamiliar to American and English readers, who may be surprised by the graphic descriptions of incest, murder, mutilation, and cannibalism. Chronicle Books has done us a service in helping restore to our adult culture these vivid, evocative folktales. --Fiona Webster

About the Author:
Tracy Arah Dockray is an illustrator, muralist, and sculptor with a taste for the macabre. A Texas native, she now resides in New York City.

Maria Tatar is a professor of Germanic languages and literature at Harvard University and author of The Hard Facts of the Grimms' Fairy Tales.