Items related to Art of Modern Rock: The Poster Explosion 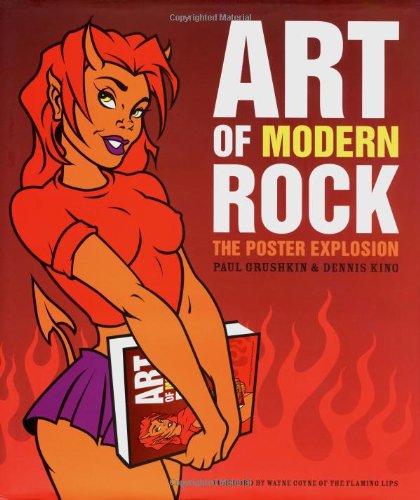 Authoritative, eye-popping, and massive, Art of Modern Rock is the first and last word on contemporary concert posters. An art form that has grown hand-in-hand with the independent music scene, heralding small and large gigs alike, the posters have emerged from visually creative street-level notices to prized collectibles rendered in a variety of styles and media. Today's poster artists combine the expressive freedom pioneered in the poster revolution of the 1960s with the attitude and the do-it-yourself approach of the punk scene, creating an unprecedented surge of innovative poster production on an international scale. Featuring over 1,600 exemplary rock posters and flyers from over 200 international studios and artists, Art of Modern Rock is the long-anticipated sequel to coauthor Paul Grushkin's The Art of Rock. Profiles and quotes from the pioneers in the field and their emerging heirs share nearly 500 gloriously packed pages of poster after mind-blowing poster. As brash and colorful as the burgeoning scene it documents, Art of Modern Rock is the must-have book for music and poster fans and collectors.

Paul Grushkin is the author of the best-selling The Art of Rock: Posters from Presley to Punk and an acknowledged expert in rock merchandise. He lives in the San Francisco Bay Area.

If MTV is any indication, the face of rock'n'roll needs plastic surgery. Sure, Britney's got a hot belly and Beyonce a glorious booty, but sex is this close to selling itself out. Soon, people will be demanding money shots in their milk commercials. Where's an intelligent consumer to find imagery that both tickles the brain and plugs one into popular culture?

Try Paul Grushkin and Dennis King's Art of Modern Rock, which showcases in full color more than 1600 rock posters and flyers by some 200 international artists, from veterans like Frank Kozik to up-and-comers a la Leia Bell. More than a sequel to Art of Rock (Abbeville, 1987) Grushkin's best-selling survey of psychedelic posters from the 1960s and 1970s this is the definitive document of a tens-of-thousands-strong countercultural revolution that began in the late 1980s with the grunge movement and continues today from New York City to San Francisco to...Des Moines and Denton, TX?

"Wherever there's a 'kid' a teenager, a twentysomething, or even a thirtysomething who is on the cutting edge of music there's someone cranking out posters," Grushkin asserts.

In fact, more rock posters have been made in the last ten years than in the history of rock'n'roll. To hear Grushkin tell it, this explosion has to do with how today's teenagers access music, i.e., without seeing great LP art, as Grushkin did in his youth, and, increasingly, without walking into a music store. With MP3 looming large, "the art that always defined your relationship to the music" is disappearing.

In the spirit of the hippies, punks, and alternative rockers before them, young music fans have been filling the void themselves. Via the Internet, these kids track their favorite bands as they tour and call up promoters about doing posters for shows. While some may go digital, many still rely on the old-school (read: cheap) silk-screen method, which King-who holds one of the largest rock poster collections in the world-credits with starting the poster revolution.

"It's almost political: all these people realizing that they have the power to create and disseminate their own imagery," he says.

The insane eclecticism of the featured artists called for a thematic organization; readers will witness the many incarnations of that rock poster staple, the devil, for instance. Heightening the effect is King's clever layout, which mimics both a gallery wall and a web site. The final product is a pastel-cum-Day-Glo gem that will make music fans into art fans and vice versa. -Library Journal, Editor's Pick

Concert posters, as any rockologist will tell you, are the Van Goghs and Matisses of the music scene. And in 1987, author Paul Grushkin cobbled together an encyclopedia of the genre's best in an eight-pound hernia of a book called "The Art of Rock." In the 17 years since, the rise of graphic-art technology, digital music and local indie-rock scenes has sparked a second wave of eye-popping posters. So Grushkin and collector Dennis King teamed up for a sequel.

"When you've got the Bible," says Grushkin, "there's gotta be a New Testament, right?" Hence, "The Art of Modern Rock": an exhilarating volume of 1,800 posters from grass-roots artists hyping local shows by bands like the Beastie Boys, the Flaming Lips and many more no one's heard of. Like its older sibling, it flat-out rocks. -Teen Newsweek