Items related to Inside The Mirage: America's Fragile Partnership...

Inside The Mirage: America's Fragile Partnership With Saudi Arabia 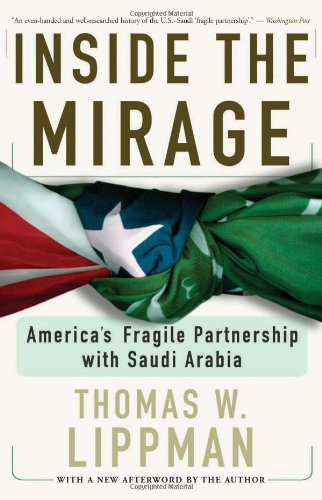 The relationship between the United States and Saudi Arabia has always been a marriage of convenience, not affection. In a bargain cemented by President Roosevelt and Saudi Arabia's founding king in 1945, Americans gained access to Saudi oil, and the Saudis sent the dollars back with purchases of American planes, American weapons, American construction projects and American know-how that brought them modernization, education and security. The marriage has suited both sides. But how long can it last? In Inside the Mirage , veteran Middle East journalist Thomas W. Lippman shows that behind the official proclamations of friendship and alliance lies a complex relationship that has often been strained by the mutual aversion of two very different societies. Today the U.S.-Saudi partnership faces its greatest challenge as younger Saudis less enamored of America rise to prominence and Americans, scorched by Saudi-based terrorism, question the value of their ties to the desert kingdom. With so much at stake for the entire, ever-volatile Middle East, this compelling and absolutely necessary account brings the light of new research onto the relationship between these two countries and the future of their partnership.

The discovery of oil in Saudi Arabia led to a relationship between the Saudis and Americans that made all the sense in the world and, at the same time, no sense at all. Economically, it was a dynamic and effective model. The Americans were able to purchase more oil as car ownership in the United States escalated throughout the 20th century, meanwhile the Saudis were able to take that money and use it to buy all the latest products and technology from the Americans and transform their country from a pre-industrial kingdom a bustling modern civilization (complete, today, with Starbucks, McDonalds, and shopping malls). Making all this happen, however, meant situating thousands of American civilians in a country in which they simply did not fit. Veteran Middle East scholar and journalist Thomas Lippman's Inside the Mirage examines the 70-year history of the Saudi-American relationship. While he touches on the troubling issues that came to light after the events of 9/11, Lippman's exploration of the quasi-suburban world inhabited by American employees and their families proves most fascinating. Many Americans profiled seem to have been transported out of an old episode of Leave it to Beaver and dropped, in tact, in the middle of a desert nation, dwelling in cordoned off communities and having little contact with the Saudis outside of what was professionally necessary. Cultural and religious differences provide stark contrast between the Americans and the fundamental form of Islam practiced by the Saudi royal family and prevalent throughout the kingdom. These differences combined with the inherent pressures of great wealth and big business to form a relationship that is vitally important to both countries but that was tenuous to begin with and, as Lippman explains has remained so ever since. --John Moe

Thomas Lippman, a respected former correspondent and bureau chief at the Washington Post, traveled with Albright for two and a half years to write this political biography. Lippman is the author of Understanding Islam , which is now in its second edition.

2. Inside The Mirage: America's Fragile Partnership With Saudi Arabia